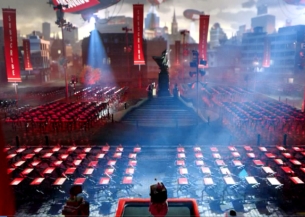 Airing from Friday 2 October, the new TV ad ‘Set Yourself Free’ launched as a premiere ad break during Emmerdale under ITV’s Proud to Present banner and was introduced by the channel’s continuity announcer. The ad is a two minute CGI film which opens in an Orwellian world with an army of TVs brainwashing inhabitants to ‘conform’, ‘upgrade’ and ‘subscribe’.

In this world is the advert’s young Hero TV, at odds with those around him, and a girl with her dog who long for a better way to watch TV. As the Freeview Play Hero TV escapes the dystopian world, the viewer follows his journey until he is united with the girl and dog and opens up a whole new world of free-to-air television to them.

‘Set Yourself Free’ is set to a new version of the iconic ‘I Dreamed A Dream’ from Les Miserables, performed by Sarah Kingsmill and recorded specially for the campaign.

The TV campaign will also include 60 and 40 second versions plus product adverts which explain the features and benefits of Freeview Play. It will also be complemented by in-store, print and outdoor advertising as well as digital and social activation.

Freeview Play launches this month and combines catch-up TV, on-demand services and live television, bringing the ability to watch what you want, when you want, as easily as possible, to the mass market. The service is free from subscription and works with all existing broadband Guy North, Freeview Managing Director, said: “Freeview Play is the biggest development in the brand's history and our new advert perfectly illustrates that with it viewers are now free to choose the TV service that best meets their needs.”

Owen Jenkinson, Freeview Head of Marketing, said: “Set Yourself Free is really an emancipation story.  The aim of the advert is to challenge category norms and show that there is a better, savvier way to watch free TV in a visually striking and compelling narrative.”

‘Set Yourself Free’ was created by Leo Burnett London with visual effects by Electric Theatre Collective. Directed by Sam Brown at Rogue and Sam Taylor and Bjorn- Erik Aschim at The Line. MEC is Freeview’s media buying agency.