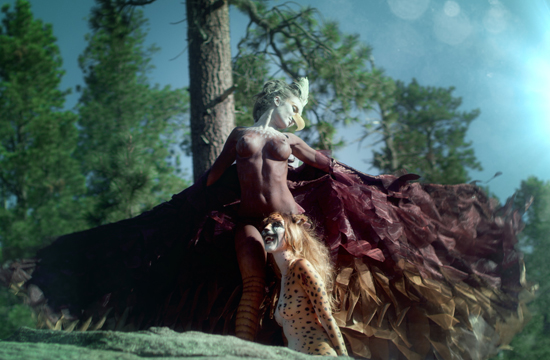 The standing-room only crowd at the 2012 PromaxBDA Conference said it all. Audiences were inspired by the caliber of music video work they had just witnessed as part of "Videophonic," a collaborative effort of nine leading design studios working on a common assignment: create a music video for a classic song from the pre-MTV era.
Now, the entire compilation of videos can be seen at the newly launched Videophonic website: http://www.videophonictv.com/
The brainchild of Steve Petersen, Co-Founder/Creative Director of BiG MACHiNE, the nine music videos bear the unique fingerprint and style of each participating studio. "Videophonic" initially launched as a creative exercise for rival design and production studios to unite and collaborate. The participating companies include: BiG MACHiNE, Roger, Pistolera, Radley, Royale, Space Junk, Wildlife, Third Eye Design and Tennant McKay from South Africa.
To view BiG MACHiNE's video, please go to: http://bigmachine.net/works/i-feel-love-music-video/
"I wanted to come up with a way to take a snapshot of the state of design in our industry," explains Petersen. "A way to take a look at common design trends and how other agencies approach creative assignments. I thought that a forum where talented - and typically competing -- studios could all work on the same assignment would be a great way to compare design styles. By inviting other studios from around the world to interpret a music video in their own way, we were able to get a glimpse into each studio's one-of-a-kind creative process."
Adopting a song with a music video that never got one presented a rare opportunity to create without a marketing agenda. The videos, which made their world premiere at the 2012 PromaxBDA Conference in Los Angeles, showed a range of live-action filmmaking, groundbreaking animation, and new storytelling techniques.
BiG MACHiNE selected Donna Summer's 1977 hit "I Feel Love," featuring human animals, gorgeously body-painted by artist Hans Haveron as a cheetah, eagle, and hunter, as they move sensually through an enchanted forest.
"The nice thing about music videos is that the narrative concept doesn't have to be as real world-based as a standard feature film," says Petersen. "Fantasy and great visuals work really well in this medium. The song features an electro-beat, similar to a contemporary techno song. We felt that the non-specific lyrics allowed for an open-ended interpretation of the song. Our video is a heroic, survival-driven love story. It was the perfect fit for us."
The biggest challenge for BiG MACHiNE was the extremely tight turnaround. The video was shot in Big Bear on a Sunday, and was set to show at the conference one week later. The post process - from the RED conversation and edit to the VFX, composite and sound design - was completed in a matter of days.
"It was all worth it," concludes Petersen. "I had wanted to work with [body paint artist] Hans Haveron for a long time. It was one of the most awesome experiences I've had as a director and artist. Bringing his art form into our ours made for a really special piece that's way beyond what I thought it would be."
Credits