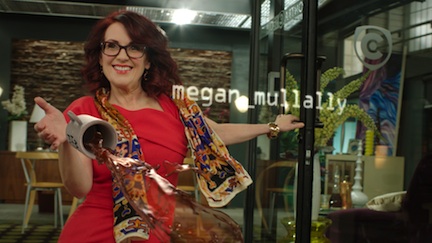 Moving through various wings of Contra headquarters in captivating frozen moment, the firm's oddball geniuses are introduced one by one: Cameron (Bret Harrison) solders the wrong part of a circuit board, igniting a dramatic display of sparks; ever-cunning Contra head-honcho Veronica (Megan Mullally) laughs hysterically to the point of spilling her coffee; fanboy Cash (Alphonso McAuley) shoots up the office with a Nerf gun causing Molly (Erin Richards) to hurl a flurry of paperwork; and concluding the sequence, Oz (Christian Slater) burns a top-secret document while puffing on a cigar and blowing smoke rings toward the camera.
To view, please go to: http://bit.ly/H54MzA
BiG MACHiNE Creative Director Ken Carlson, who recently directed the main titles for the ABC sitcom "Suburgatory," and Creative Director Steve Petersen combined their graphics, VFX and live-action production talents to create the mixed-media show open. The duo collaborated closely with "Breaking In" creators Adam F. Goldberg and Seth Gordon ("Four Christmases," "Horrible Bosses" and acclaimed documentary "King of Kong: A Fistful of Quarters"), as well as the show's Co-Producer Sandi Hochman.
"Both Steve and I have known Seth for many years," remarks Carlson. "We all worked together on a USA pilot before Steve and I formed Big Machine in 2003. Since Seth comes from a motion design background, he was very respectful of the process, our time and resources. It was a very collaborative process, from the pitch stage to post-production."
With the second season of "Breaking In" focusing more on the workplace dynamics rather than the crew's fieldwork adventures familiar in Season 1, the show's creators wanted to better reflect the new direction with a completely new main title sequence. Retaining only the typeface used for Season 1, the overhaul included the introduction of several new regular Season 2 cast members.
All of the live-action footage was specifically shot for the opening sequence, with BiG MACHiNE using the same Arri Alexa cameras used in production in order to maintain continuity with the look and feel of the show. For the pivotal frozen moment effect, BiG MACHiNE tapped its closely guarded "Glidetime" technique, drawing on methods that Petersen developed utilizing a handheld camera for a recent National Geographic documentary about the St. Valentine's Day Massacre.
"Due to the style of 'Breaking In,' we decided against using the handheld technique with this project," explains Carlson. "The technical challenges were having to do full 3D tracks on multiple scenes, performing background repair to remove some of our rigging structures, and creating and rendering photo-real 3D objects."
Carlson and Petersen transcoded the shots using Adobe After Effects and created all of the 3D effects in Cinema 4D. All compositing was then completed in After Effects.
"It's always a creative challenge to fit so many images into just 20 seconds," concludes Carlson. "By utilizing the frozen in time effect, we were able to pull it off and creatively introduce each character through their unique personality traits in a manner that complimented the comedic tone and overall context of the show."
Client: Adam F. Goldberg Productions, Happy Madison Productions and Sony Pictures Television
Airdate: Spring 2012
Compositing, design & animation, editorial and live-action direction: BiG MACHiNE Creative Director(s):  Ken Carlson, Steve Petersen Senior Producer:  Matt LeBoeuf Technical Lead:  Benjamin Weinlich
About BiG MACHiNE:
BiG MACHiNE is an award-winning visual production company founded in 2003 by Steve Petersen and Ken Carlson. BMD has produced visuals for everything from: film titles, advertising, TV shows, games, multi-screen experiences and mobile devices. Recent clients include Ubisoft, Nike, NFL Network, Warner Bros. / ABC, and Chevy.