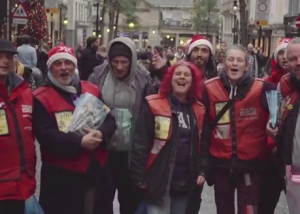 The Big Issue Foundation has released a new online film showing Big Issue vendors singing ‘The Twelve Days Christmas’ with new lyrics relaying the positive ways in which the foundation helps them to create a life out of a livelihood.

The entertaining, upbeat film is part of a new online campaign to raise awareness and donations for the foundation created by Fold7.

The Big Issue version of the Christmas song has lines such as: “On the fourth day of Christmas, Big Issue did help me - earn my own cash; get another chance; recover from addiction; work with great people; find my own place.”

The lines are shared between the vendors and there are lots of funny, spontaneous moments captured on film.

The film features cameos from John Bird, the founder of The Big Issue, Stephen Robertson, the chief executive of the foundation, and supporter of the charity, the actor Christopher Timothy.

The campaign also includes an e-card which will be sent out to The Big Issue Foundation’s database of donors and supporters to thank them for their ongoing support. The e-card plays the film and also tells the stories of individual Big Issue vendors.

The Big Issue Foundation’s Stephen Robertson said: “The team at Fold7 has done an amazing job with this film. We’re delighted to have such an upbeat Christmas message to send out to our supporters that highlights the energy and positivity of our sellers on the streets.”

The Fold7 creative team behind the campaign, Jonny Fordham and Suzi Paddison, said: “We would like to say a big thank you to all of the vendors who were involved with filming as well as to Tom, a volunteer for The Big Issue Foundation, without whom it would not have been possible for the day to run so smoothly.

“It was great to meet and work with each of the vendors, and we were humbled by their enthusiasm. Spending time with the vendors made us realise just how important the Foundation is and really highlighted the great work that they continue to do, which we are proud to support.”