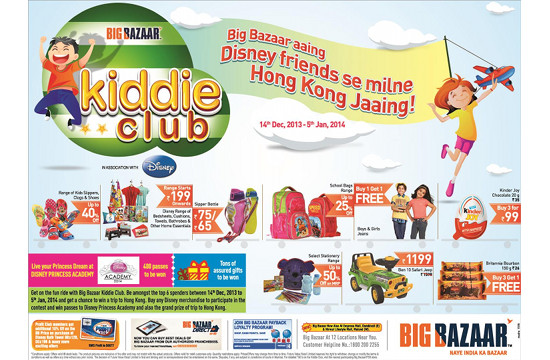 Big Bazaar, the hypermarket giant of India always identified early opportunities that revolutionised consumption of an average Middle class household; be it targeting women through creating special consumption occasions like Wednesday bazaar or the youth through sub brands like FBB (Fashion at Big Bazaar), this brand extended its conversations across consumer groups and started building its strong hold through various initiatives.

One such attempt is the Big Bazaar kids club targeting the age group of 3 to 15 years.  Understanding the growing profitability of tapping consumers at a younger age and with over 7% business catering to the kids merchandise, Big Bazaar wanted to establish itself as a destination for kids' shopping. This club aimed at reaching around 6,00,000 kids in its launch phase and build a regular appointment with them, thus ensuring repeated footfalls throughout the year.

Today's over indulgent and demanding kids who are independent at an early age and quick to discover the joys of pester power are India¿s most conspicuous consumers.  They are not just involved in toys, gadgets and clothes but are also counselling their parents with big ticket purchases like cars also. Most brands are already leading successful conversations with this age group. How does a brand known for groceries and veggies break this clutter and make a fun and attractive proposition to this age group? How to make them visit a retail store more often?  Will the communication created by adults be appealing enough for this age group?

Conceptualizing the idea through a kids advisory board

In order to understand their world and speak their language, Big Bazaar formed a Kids Advisory Board by selecting 12 junior brand managers for the club. This board helped in conceptualising the very idea of the club: right from the fun activities which would keep the kids interested in to the most relevant offers and prizes. The entire mechanism of the club was worked on by this board.  Only after a pilot research test with this board, the communication and offers were finalised.

This is an exclusive kids club which allows kids to behave like adults: each member kid gets his/her own card and they can accumulate points on this card by shopping and/or participating in various fun events. Based on the points accumulated on that card, kids get to win exciting prizes. The idea is to introduce the brand and its merchandise to this age group through fun activities conducted in stores.

Mechanism of the club

Parents enrol their kids to this kids club through their payback cards. Each kid gets his/her own identity (a card for himself) with their name, gender and age on it. On purchase of certain kids' items or on participation in a few activities at store, members accumulate points. These points equate to certain benefits and assured gifts. Big Bazaar tied up with Disney for the grand prize, a trip to Disneyland, Hong Kong. Other assured gifts are Disney Princess Academy passes, Big Bazaar gift vouchers etc.  Using the payback card is a smart way to not just maintain a database of this age group but also to reach out to their parents through them.

Getting kids to connect and engage with a retail brand like Big Bazaar that generally speaks to their parents at large was quite a challenge in itself.  To top it, we had to share with them the mechanism of the club and the various gratifications that the kids can expect, after they become a part of the club. So the first thing DDB Mudra West team decided was that the tone of the Kiddie Club campaign won¿t be like the other Big Bazaar campaigns. They spoke to the kids in a language that they find exciting and can relate to themselves. After interacting with a lot of kids and understanding what excites them, the team cracked this new lingo for the Kiddie Club communication that has Hindi words ending in 'ing'; this gave a good ring to what team said and grew on kids even during the research. Thereafter, the jingle for the TVC as well as the print copy was entirely written in this new Lingo.

"We at Big Bazaar recognized that today's kids are very independent and have their own individualistic tastes and preference. Big Bazaar's Kiddie Club recognized their need for independence by involving them in building this campaign. We can say that this is a campaign of the kids, by the kids and for the kids. Idea was to make their shopping experience memorable and fun at our stores based on their definition of fun and memorable experience. I am sure this exclusive membership will make every kid feel special and build a special bond with the brand," said Akshay Mehrotra, Chief Marketing Officer, Big Bazaar.

Commenting on this, Sanjay Panday, Sr. VP and Business Head, DDB Mudra said" "The idea was to 'unlearn' what we knew and 'learn' something new about kids. And what better way than getting the 'kids' to create the idea that they believed would work for their peer group. The exercise was truly enlightening and gave us some sharp insights about how today's kids think and how they have a strong point of view on just about everything. These learnings will help us build a much larger and sustainable agenda for various kids' related properties at Big Bazaar.