Campaign allows foodies to bid on VIP tables, with proceeds donated to The Hunger Project Australia 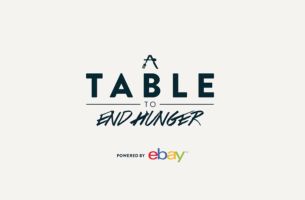 Australians can grab a table at some of Sydney’s most exclusive restaurants on short notice and do good at the same time, through McCann Sydney’s campaign for The Hunger Project Australia.

The campaign, “A Table to End Hunger,” aims to solve a first-world problem while combating the larger developing world problem – food privation.

Launching today, ATable to End Hunger invites foodies to bid on a table at exclusive restaurants normally associated with long lead reservation times  – including Rene Redzepi’s sold-out NOMA Australia at Barangaroo,which already boasts a waiting list of 27,000 – with all proceeds donated to The Hunger Project Australia.

Hungry foodies can bid on VIP tables via A Table to End Hunger’s special eBay site. In addition to NOMA, other high-profile restaurants joining the cause include Aria, Bennelong, Quay, Marque and Guillaume. Tables are available on Fridays, Saturdays and Sundays from the Valentine’s Day weekend in February to March 2016, with auctions going live weekly for forthcoming weekend reservations.

McCann developed the concept and strategy for the campaign, as well as managing the media. Dec PR was responsible for helping deliver the PR strategy.

The Hunger Project is a global, non-profit organisation dedicated to ending world hunger by 2030 –not by handing out food, but by breaking the cycle of poverty. A Table to End Hunger is a local Australian initiative that will support the global mission of the organisation.

Cathy Burke, CEO of The Hunger Project Australia, said: “Australia is a nation of foodies whose appetite for the greatest and latest in the dining-out scene is insatiable. That’s why we’re thrilled to partner with McCann and Australia’s top restaurants to help solve chronic, persistent world hunger."

“Although this might seem like a lofty goal, in the past 25 years the number of people living in hunger has actually been cut in half! We have come a long way, but there are still 795 million people living in chronic hunger globally. By unlocking their capacity, creativity and leadership, we can empower these people to transform their futures and end their own hunger,” Burke added.

McCann Sydney Executive Creative Director Dejan Rasic said: "The Hunger Project's commitment to ending world hunger is more than just a mission statement. We worked hard to develop an idea to drive PR and lift awareness of The Hunger Project and support for their incredible work. Bidding on a table to put food on someone else’s  simply made sense."

Funds raised from the eBay auctions will enable The Hunger Project to empower women and men living in rural India, Bangladesh and Africa to end their own hunger by providing training to develop their skills, knowledge and resources.

This includes training on more effective farming techniques to grow more food, child and maternal health and nutrition so children can grow up strong and healthy, HIV AIDS education to stop the devastating spread of AIDS, literacy programs so people can learn to read and write, entrepreneurial skills so small businesses can expand and flourish, how to have a voice in the development of their communities and with their local governments, learning to demand better access to clean water and sanitation, and more.