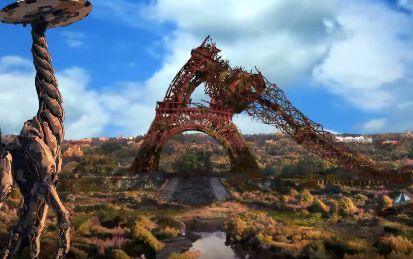 Horizon Zero Dawn, the fantasy action role-playing game, recounts the story of a warrior in an opulent post-apocalyptic world where nature has taken over. Ever since the rise of machines, fearsome beings whose origins are unknown, Earth’s human inhabitants live primitively, in tribes. Life as we know it is now a forgotten ancient civilisation, eradicated by the new leaders…But what happened to our world?

With incredible technical dexterity, Biborg’s teams used matte painting technology, traditionally used in cinema, yet a rarity in advertising, due to its tediousness. The time-consuming technique consists of digitally painting a background, upon which film is later overlaid, much like the fantastical scenes seen in Star Wars.

“To make sure the animation came out well, we created hundreds of Photoshop filters, then applied different coats of damage and degradation to each monument to make it seem like thousands of years were going by,” explains Biborg’s Creative Director and Co-Founder, François Girardot. “Our teams had to be very patient and meticulous for the two-month production. We wanted to respect the Horizon Zero Dawn universe, in terms of its environment, as much as possible while showing the enormity of the machines. And we had to be creative with the workflow to ensure success, using teams in Auckland and throughout France.