Better Wash Your Hands, Or You'll Set Off 'The Germ Alarm' 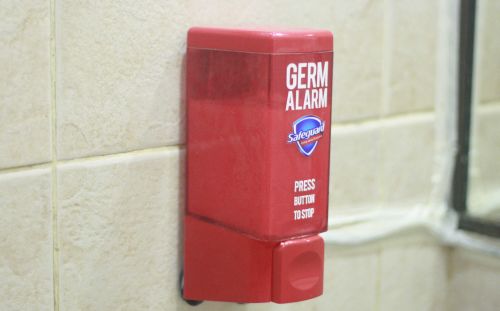 A jarring statistic was recently revealed in an article by NewsMax Health where only 5% of people scrubbed long enough to kill infection-causing germs after using the public toilet.

The reason this is alarming is because high-touch areas of public restrooms can contain more than 1,000 colony-forming units per milliliter of infection-causing bacteria.

The Centers for Disease Control and Prevention published a reminder that it takes at least 20 seconds of washing with soap and water to kill most of those germs.

Armed with this information and various studies, Safeguard introduced the Safeguard Germ Alarm, a loud, attention-grabbing alarm and soap dispenser in one. It was an invention made specially by Safeguard to tackle the issue of germs in public restrooms.

The alarm is triggered once a person leaves a toilet cubicle, and is disarmed only when the soap dispenser is pressed. Alongside every installed dispenser is a guide on proper handwashing.

First introduced during Global Handwashing Day in October 2013, the Safeguard Germ Alarm has also been installed in public restrooms around the country, as seen recently in select McDonalds branches. Schools are also beginning to introduce the alarm to their students, with Little President’s Learning Palace in the Philippines being the first of many more to come.

Through the Safeguard Germ Alarm, Safeguard, known to provide 99% germ protection, hopes to enjoin more establishments and schools in its fight against harmful diseases—and in effect, reduce the number of illnesses that could be prevented simply by regular handwashing.