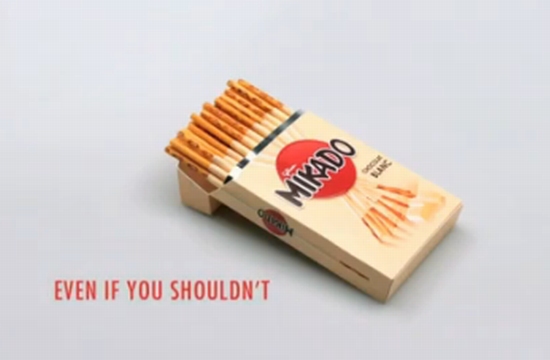 With its agency BETC, Mikado is returning to the humoristic roots that turned it into a cult brand. Just remember “The Photocopier”, the hilarious, legendary film that was voted one of France’s 5 most popular TV-commercials in the past 40 years. *

The campaign created brand loyalty, complicity with consumers and new expectations in terms of the brand’s future communication.

With this new saga, Mikado is meeting the expectations, with a wink to its old brand signature through 3 funny films.

Mikado is repositioning itself in the impulse snack market, convincing younger consumers of how irresistible the snack is, for decades shown through the signature: “Your weakness will be your downfall”.

However, this time it’s not just about adding a new creative dimension, but to spread the iconic recognition the brand has in France across Europe.

With re-designed packaging and the new advertising campaign being launched simultaneously in 7 European countries, Mikado is out to conquer a broader target audience and win over new consumers.

“Your weakness will be your downfall” has become: “Mikado. Even if you shouldn’t”, recalling the inherent irresistibility of the snack.

“Your weakness will be your downfall” or “Even if you shouldn’t” is the theme of the new Mikado advertising saga where, just as the main characters are about to eat their biscuit, they find that by doing this they put themselves in a pretty tricky situation!
The shape of the Mikado biscuit gives the impression that the character is volunteering, holding his Mikado vertically as if putting his finger up to intervene.
With this new campaign, Mikado is placing the product and its irresistibility at the heart of its communication and bringing out its sharp and universally appealing humour.