BETC promote the series with a campaign founded on the same premises as the series itselfto bring to light the true nature of a secretly outrageous family. 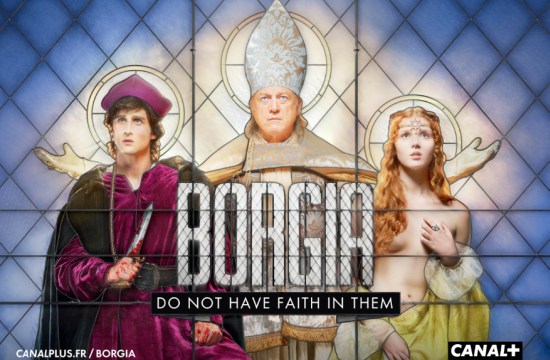 BORGIA - Do not have faith in them.

This history of the Borgia’s, a powerful, immoral and scandalous family, symbol of the decadence of the Church in the 15th century, is doubtlessly one of the most ambitious and flamboyant works ever produced by CANAL+.

Written by Tom Fontana (Oz) and directed by Oliver Hirschbiegel (Downfall), this European super-production features an international cast (including John Doman – The Wire, Damage), grandiose sets and ultra-realistic costumes to transport the viewer to the heart of the Middle Ages, in an era when no tricks were considered too devious to achieve supreme power.

To promote the series BETC came up with a campaign founded on the same premises as the series itself…to bring to light the true nature of a secretly outrageous family:

Between religion and corruption, beliefs and prostitution, holiness and nudity, who better than David Lachapelle, the master of the genre, to bring to life all the murky contradictions of this rather un-commendable family?
Drawing inspiration from the project itself, the flamboyant photographer has succeeded in bringing out the duality of the members of the BORGIA family: behind their angelic appearance, we discover that their innocent and beatified faces barely conceal the greatest vices…
The outcome is a “stained glass” effect that freezes the characters in their very decadence, highlighting their vices as though these were an immutable institution:

The posters went up in France as of 13 September; some are backlit and printed on special media where the lighting strengthens the impression of genuine stained glass church windows suspended above the streets.