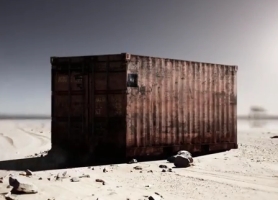 In these troubling times for freedom of information (assasinations, repression, censure), Reporters Without Borders (RSB) is taking action with its agency BETC.

To coincide with the release of its 2014 report of violence against journalists, the RSB is launching a campaign to rally public support and raise awareness for liberty and independence in journalism.

Inspired by a true story, this new film by BETC depicts a shipping container, one that doesn't contain merchandise, but, rather, a journalist, imprisoned in the Eritrean desert for the last 12 years.

Directed by the duo Johnny Alves and Benjamin Darras (One More) and produced by RITA films, this film launches December 16th in parallel with a special operation on the Champs de Mars where RSB has installed a similar shipping container in front of the Eiffel Tower.