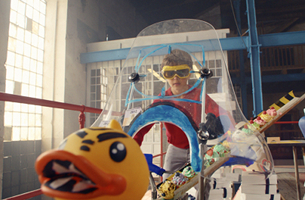 Petit Bateau is back with a new international campaign, ‘The Mini Factory’, that pays homage to what made the brand’s success: the quality of its products, combined with a strong knowledge and affection for children and their personalities; creative, free and full of energy.

The international brand film, created by BETC, is the first since 2010 and launches a new signature for Petit Bateau: ‘For Serious Kids’.

Petit Bateau invites us into a dreamt up factory, straight out of a kid’s imagination, where we follow a tiny quality controller around his incredible, secret factory where the Petit Bateau clothes are made and tested according to a somewhat different procedure.

A boxing-glove-drum beats up a tank-top, a steam engine train knocks over pots of chocolate on white t-shirts, the cupcake-canon fires cakes on tops and a typewriter becomes a loom in Petit Bateau’s dream factory.

All set to Herbie Hancock’s cult hit Rockit, here in a punchy interpretation by Feadz, the renowned DJ from Ed Banger records. The canny mix of electro and rap, along with irregular beats and sharp scratches celebrates kids and their originality.

The film was directed by American director Patrick Daughters, also behind music videos for The Yeah Yeah Yeah’s, Bright Eyes, Kings of Leon, Mika, to mention a few.

Rémi Babinet, President and Executive Creative Director, BETC, says: « The ways brands tend to represent kids are often very uniform: either they’re portrayed as fashion victims or as too “perfect” and well behaved. Petit Bateau knows the kids that parents dream of are in reality far from perfect: they’re kids who let their imagination run free, who break the rules and shape themselves beyond norms.