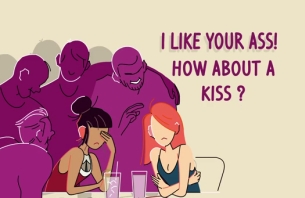 Available both in the App and Play stores, the application developed by BETC is a French version of the 'Yo' app - a hugely successful American product that allows users to send simple interactions to their contacts.

At first glance, 'Hé' looks much the same as 'Yo', but in fact the app has a specific functionality - once a user adds themselves to your friend list, you’ll begin to receive messages simply saying 'Hey'. The interactions seem innocent at first, but become more frequent - and more aggressive. The notifications build to a point where they become intolerable, with the user receiving messages like 'Hey sexy!', or 'Hey bitch, turn around when I’m talking to you', among other equally shocking catcalls.

So how can you make it stop? Only by deleting the user who’s ‘harassing’ you. When you do, the message Stop Harcèlement de Rue (End Street Harassment) appears on the screen, accompanied by the message: 'TODAY YOU GOT AWAY, BUT FOR MANY PEOPLE STREET HARASSMENT IS AN EVERYDAY PROBLEM.'

The user is then directed to the group’s website at www.stopharcèlementderue.org , where they’ll find a list of concrete strategies for tackling street harassment.

The activist organisation Stop Harcèlement de Rue was founded in 2014, with the goal of raising awareness regarding this last remaining stronghold of what is termed ‘everyday sexism’- the seriousness of which is too often downplayed. The group aims to offer concrete solutions to all those affected by the issue.

It is to this end that they approached the BETC agency for help in creating this ‘snare’ application. Aiming to reach as many people as possible as quickly as possible, the operation seeks out those who may not yet be aware of the dangers of street harassment in the most intrusive way possible: by hijacking their smartphones.

The logic is clear: only when each and every person understands the seriousness of Street Harassment will we be able to stop it in its tracks.