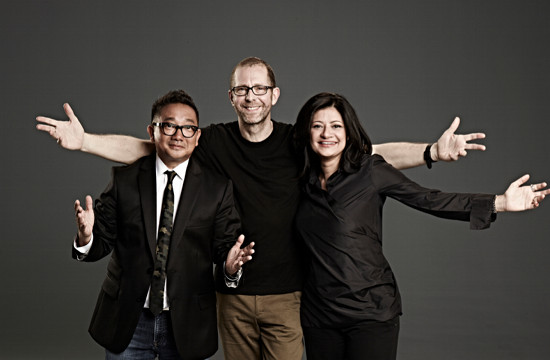 Rémi Babinet, Founder and Creative Director of BETC announces the launch of BETC in Brazil with the appointments of Erh Ray and Gal Barradas as co-CEOs of the new Sao Paulo agency.

Erh Ray is one of Brazil’s most awarded creative directors and a proven agency leader. Previously founder and CEO of his own agency, BorghiErh in Sao Paulo, Erh is the creator of famous Brazilian campaigns for brands such as Parmalat, Itau, Stella Artois and Unilever.

Gal Barradas is one of Brazil’s leading media personalities with exceptional agency management and digital credentials. Previously partner and CEO of F.biz in Sao Paulo, Gal was named the Most Outstanding Person in the Brazilian digital market and is a member of the Executive Committee of the Brazilian Advertising Congress.

”I am delighted that Erh and Gal are joining us to open and develop BETC Sao Paulo; they are not only highly respected figures in the Brazilian industry but proven leaders with incomparable experience in digital and traditional media. Together with our Paris and London offices, they will be a further step towards our ambition of providing a fresh and unique alternative to traditional networks," said Babinet

With Erh and Gal’s combined experience, BETC’s ambition in Brazil is to build a ‘local powerhouse’ agency that is powerful both locally and globally. This strategy reflects the culture and success of the Paris office: BETC Paris is France’s most creative agency and, with over 750 employees, it is also one of Europe’s biggest agencies. 70% of BETC Paris clients are international, with over 100 markets being handled from the agency’s central Paris headquarters: key clients include key clients include Peugeot, Louis Vuitton, Evian, L’Oréal, Total, Lacoste, Sephora, Air France, Decathlon, Disney, McDonalds, Canal +, Ibis (Accor group), Pernod Ricard, Mondelez, Schneider, Ubisoft, Van Cleef & Arpels, Roche Bobois. BETC London was launched in 2011 with the same ambitions: the agency quickly won prestigious local and international accounts (notably Bacardi and Diet Coke internationally, and Ibis and Cow&Gate locally) and has tripled staff numbers.

BETC is one of only eight agencies in the world (and the only French one) to have made the top 50 table of the Gunn Report international creative ranking for 10 years in a row, thanks mainly to work for clients such as Evian, Canal+, Air France and Peugeot. In particular, BETC has produced some of the world’s most-viewed viral campaigns: ‘Rollerbabies’, BETC’s 2010 campaign for Evian, entered the Guinness World Records as the most- viewed on-line ad ever; ‘Baby&Me’, the latest campaign for Evian (April 2013), is ranked as the world’s most- viewed viral campaign in 2013 by Adweek in the USA; the agency’s December 2013 campaign for Louis Vuitton is ranked by YouTube as the most-viewed ad in the world for a luxury brand.

In 2013, Erh Ray and Gal Barradas aim to create a new generation agency that combines traditional and digital talent at its very foundation, with the same creative ambitions as BETC Paris and BETC London. BETC Sao Paulo will inaugurate its headquarters in March 2014.

Erh Ray & Gal Barradas said: “Building BETC in Brazil is a huge opportunity; for me, as a professional looking for unconventional ways to display creativity, but also for brands seeking to innovate in their communications approach. Together with Gal, we represent creativity, strategy, innovation, design and digital knowledge, a sum of different and complementary professional experience that is 100% capable of offering something new. We want to go far, to find that thing that will make the difference both for brands and for the people who have relationships with them.”