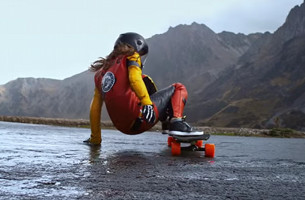 Bouygues Telecom, the leading French telecom company, launches a new campaign, created by its agency BETC who won the account earlier this fall. With the campaign, Bouygues proudly presents their new signature: “we love technology”.

Bouygues Telecom positions itself at the forefront of technology and new development - and today, technology is for everyone, and it’s a pleasure. The pleasure of sharing photos, watching videos on a phone, the pleasure of listening to music.

To show this, Boyuges Telecom and BETC created a film that celebrates the joys of technology. Thanks to Bouygues’ 4G networks, the film takes the viewer along a connected road trip with the Longboard Girls Crew, an internationally renowned longboard skating community. From Bagnères-de-Bigorre to Biarritz, the film is a real documentary of the Longboard girls’ way of life – skating, sharing and friendship.

The film is set to Talisco’s ‘The Keys’ and was directed by an international star of skate films: Ty Evans, who also directed the celebrated film ‘We are Blood’.

The TV campaign is accompanied by an outdoor and press campaign, a digital visual campaign, cinema, a social media campaign and a mobile pre-roll produced in 360° to create an immersive experience at the heart of the Longboard Girls Crew.