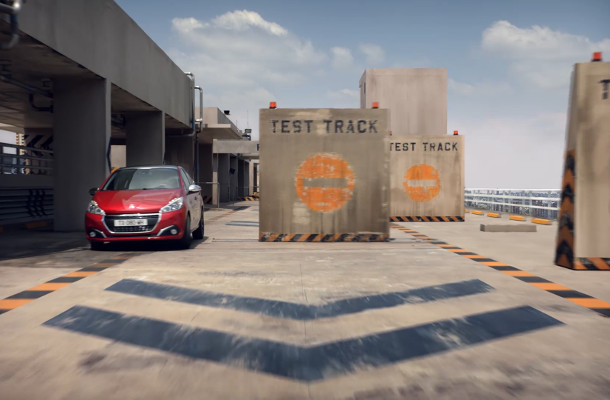 BETC Paris and Peugeot have joined forces with 9x World Rally Champion and Peugeot driver Sebastian Loeb in a comical campaign that proves that even pro drivers need a hand with the tough challenges of city driving.
In a self-aware parody of classic car advertising, the commercial sees a cocky Loeb refuse to show off the 208’s features, driving the voice over to the brink of madness. In the end, however, Loeb’s arrogance is his own undoing, as his unwillingness to use the features results in a mistake, leaving the voice over triumphant.
The spot smartly alludes to four of the 208’s specific city technologies – Active City Brake, Reversing Camera, Cruise Control, and Park Assist – without showing off any of them, and this twist was one of the keys to landing award-winning director Gary Freedman.
Represented in France by production company LA/PAC, Freedman, whose latest super bowl ad for Michelob features Chris Pratt, is no stranger to working with celebrity talent. To make the face-off between the VO and Loeb compelling, he flew professional VO talent and stand-up comedian Lewis MacLeod to the set, to create a real sense of playful antagonism between the two actors.
Creative Director, David Martin Angelus, added: “What makes the ad so real is that Lewis, the voice over actor, and Sebastien Loeb were really listening to each other throughout the whole shoot. There were moments we had to cut because they couldn’t stop laughing."
The work marks a new step in the relationship between Peugeot and long-time agency BETC Paris, as it’s the first campaign created under an entire new team led by creative powerhouses Remi Babinet and Antoine Choque (ECD of all the Lacoste work).
view more - Creative