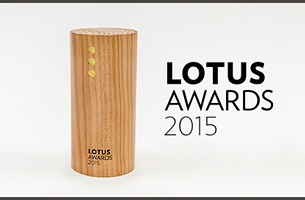 Last week, creative and innovative campaign work across 32 different marketing communications categories from 25 different agencies was honoured at the 2015 LOTUS Awards gala in Vancouver.  After taking a hiatus in 2014, the LOTUS Awards returned new and improved with significant changes to its categories, submission requirements and the judging process to enhance this year’s competition to better reflect the marketing communications mix in B.C.

This year’s panel of judges from across Canada and beyond awarded 153 LOTUS Awards, including 23 gold, 57 silver, 72 bronze and one Best In Show with the redesigned trophy at the gala event.

“The judges were impressed by the extraordinary body of work from B.C. agencies and marketers,” says Jani Yates, president, Institute of Communication Agencies (ICA), the presenting organization behind the competition.  “While this is a regional awards programme, the judges agree the calibre of work is definitely world-class.”

The competition’s top honour, Best in Show, was awarded to Rethink for the social media campaign “Hockey Heaven” for Molson Canadian.  To celebrate Canadians love for hockey, the brand asked people to submit what they would do for the game via the hashtag #AnythingForHockey. The best stories had a chance to win a variety of prizes, one of which was being invited to play a game at a giant hockey rink within a snow-covered crevice, high in the Rocky Mountains.

“I loved the idea of building the world’s highest ice rink. It's a great activation that is social by nature and has tentacles from a campaign standpoint,” says Israel Diaz, chief creative & design officer, Jackman and LOTUS Awards judge. “If this particular idea can capture the imagination of someone who doesn’t even play and who isn’t fanatical about hockey as the average Canadian – such as myself – I can just imagine how it would resonate with those who live for the 6 a.m. shinny."

Other multiple gold-winning campaigns from the competition included:

- Broadcast and print creative from Netflix’s “Entertainment Lovers,” “You gotta get it, to get it,” and “Blockbusters & Originals” campaigns from DDB Canada.

At the gala event, the ICA continued the LOTUS Awards tradition of giving a donation to NABS West and presenting the James Lee Foundation scholarship to this year’s recipients Shyronn Smardon and Heather Kai Smith.