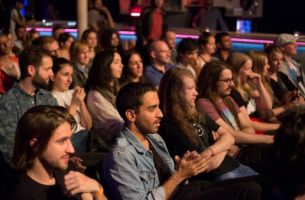 After four days of a music video marathon, prizes finally found their homes all around the world at this year's Berlin Music Video Awards. This year the festival achieved more entries than ever. Director Brandon Dermer entered the contest with a Golden Final Pass and won the Best Music Video award for No Butter on May 21, 2016. For his fantastic work, he was awarded a €3000 cash prize.

For its  fourth edition, the BMVA festival has been bigger, stronger and louder than ever before. Over 2500 visitors from all around the world rushed to Gretchen and Columbia Theatre to attend the event. Guests and nominees enjoyed 121 music videos, live shows, workshops and mad after‐parties. The legendary Glittering Carpet and grand finale took place in the presence of music video scene’s top personalities, including Uwe Flade, Rob Myers and Little Big.

Check out the highlights of the event here.

Most Bizarre - Cyriak Harris for Run The Jewels' Meowpurrdy