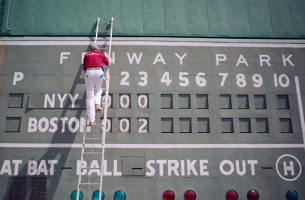 Whitehouse Post editor Barney Miller teamed up with The Martin Agency to cut two exciting spots celebrating the launch of Benjamin Moore’s new Fenway Collection. The campaign includes both a TV commercial and a web film, and debuts a paint color matching that of the ballpark’s legendary left field wall, the Green Monster.

In the web film “Monster Surprise” a little league team discovers that their home field has been repainted to look like the Green Monster at Fenway Park, while the TV spot “Bring It Home” playfully jumps between familiar neighborhood sights that have been painted in that famous shade of Monster green. And for every gallon purchased, Benjamin Moore will help to renovate youth league ballparks throughout the Boston area. Both spots were directed by Element’s Alec Sutherland and feature the Red Sox’s signature song, “Dirty Water” by The Standells.