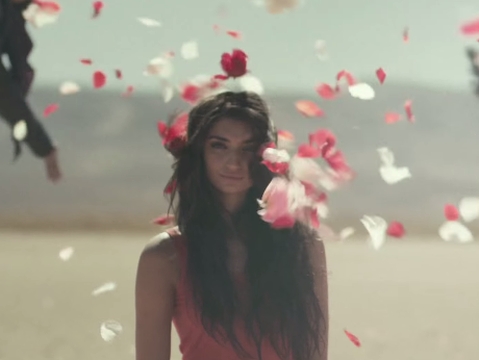 A group of men 'stoning' a woman with flower petals: this is the powerful and surprising symbol-image of the new campaign by United Colors of Benetton in support of UN Women, the United Nations agency that promotes gender equality and empowerment of women, on occasion of the UN International Day for the Elimination of Violence Against Women, on 25 November.

By choosing to overturn the cliché of "do not hit even with flowers", United Colors of Benetton and UN Women - with passion and a bit of poetry - call for ending all forms of discrimination and abuse. The global campaign, centered around an image and online videos published by the international press and on social networks, seeks to remind the world that women should no longer have to put up with discomfort, suffering or a life of misery: they should be able to choose to be themselves and not what their partners, men, religion or society would like them to be.

The goal of the campaign by United Colors of Benetton, devised and created by Fabrica, is also to advocate international awareness of the need for concrete actions to support women and prevention programs, beginning with efforts to promote an education for young men and women that develops a culture based on recognition, respect for difference and equal opportunities.

The campaign takes United Colors of Benetton's communications down a new and unconventional path, symbolically representing the deconstruction of stereotypes and prejudices, calling for an end to the culture of violence - even in its underlying values - and strongly affirming that men and women should have equal rights and opportunities in society and in life. It also seeks to highlight the urgent need for men and women to think and act together because, in the words of the Nobel Peace Prize winning author Elie Wiesel: "Neutrality helps the oppressor, never the victim. Silence helps the tormentor, never the tortured."

Phumzile Mlambo-Ngcuka, Executive Director of UN Women, said “We know that the pandemic of violence that affects 1 in 3 women and girls can be stopped. But we cannot do it alone. We need partners who help us raise awareness and promote a culture of zero tolerance toward this pervasive human rights violation. Benetton is such a partner. Their campaign, launched on the International Day to End Violence against Women supports our global efforts. We appreciate this commitment to the cause.”

Erik Ravelo, Head of Social Engagement Campaigns of Fabrica (Benetton Group’s communications research center) and creative director of the campaign, said: "we have always focused on socially responsible communication initiatives and were happy to lend our creativity as part of efforts to raise awareness on the issue of violence against women: we chose a flower instead of a stone to say no to a human rights violation that causes permanent physical and emotional scars and that is reflected in all social classes."