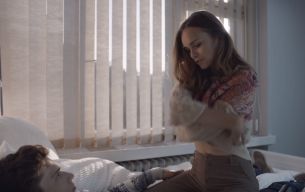 For the first time in its history, United Colors of Benetton will present on both big and small screens a series of commercials that, as of September 22, will spread the clothing brand's new campaign to TV (Italy and India), cinema (Italy and Mexico) and digital media in Italy, India, Spain, France, Germany, Portugal, Greece and Mexico.

The underlying message of clothes for humans is the brand's philosophy, developed in collaboration with the agency 180 Amsterdam. This has already been translated into a global advertising campaign, a new website and a series of in-store initiatives and materials including a magalogue, a hybrid between magazine and a catalogue.

Clothing plays an important role in shaping our emotions. Every morning when we choose what to wear, we are deciding on our personality for the rest of the day and how we will emotionally respond to the situations we face. The clothes for humans philosophy is around understanding moments and emotions in peoples' lives and creating clothes that empower them to make the most of those moments (i.e. dress up, dress down, dress to move).

The film campaign embraces honest human moments and emotions to show Benetton truly understands people; in these short 15-second clips, portraying authentic moments of real life, the UCB FW 2016/17 collection's clothes are the real protagonists of the stories behind the emotions.

A girl turns her house upside down looking for a lost earring; a woman has a job interview on Skype and is barely wearing any clothes at all; another one is confronted with a common dilemma: diet and fitness. Nine video episodes that show ordinary situations - simple moments - that are usually overlooked by the fashion industry. The protagonists are women with original beauty, not stereotyped, who move through cosy-looking environments that are contemporary and international at the same time, just like Benetton. The videos are directed by Jaron Albertin, the multiple award-winning advertising director whose videos have been viewed millions of times on social networks.

The videos will play a key role in Benetton's digital media investment and will be the format for communicating the clothes for humans concept in Italy, India, Spain, France, Germany, Portugal, Greece, and Mexico.