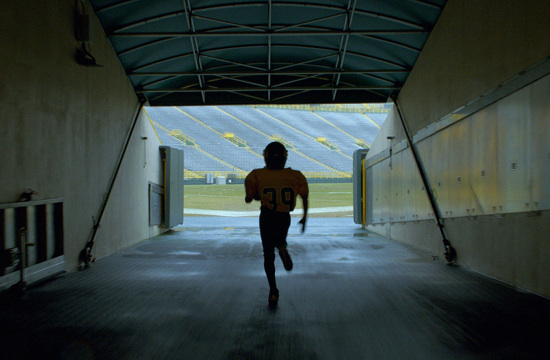 On Sunday, teams from Seattle and Denver won’t be the only ones trying to go all the way. On game day, Coca-Cola will tell the story of a small but determined high school football player who earns the confidence of his team when he gets the game-time opportunity of a lifetime.

One of two 60-second Big Game ads from Coca-Cola, “Going All The Way” is an all-American tale of triumph over adversity. The main character, Adrian, struggles to fit in and make his mark until the opposing team fumbles the ball and it lands in his arms. That’s when it’s Adrian’s time to shine. With support from his team and the crowd in the stands, using sheer grit and determination, he breaks through, perseveres and achieves unlikely greatness.

“Going All The Way” was shot in Ashwaubenon, a suburb of Green Bay, Wis., with the final moments filmed at historic Lambeau Field. Most of the ad’s cast was made up of Green Bay-area residents, and the stadium’s actual groundskeeper of 17 years has a featured role in the spot.

The commercial, set to House Of Pain’s “Jump Around,” traces Adrian’s unlikely journey from benchwarmer to star of the game. After scoring a touchdown, then running through the streets of Ashwaubenon, his dreams are realized when he runs the length of Lambeau Field, performs a touchdown dance and attempts his own Lambeau Leap in front of a nearly empty stadium. He celebrates a moment of happiness and accomplishment when a groundskeeper hands him an ice-cold Coca-Cola.

"'Going All The Way' is a story that celebrates a young man accomplishing his dreams. It’s also a celebration of the amazing town of Ashwaubenon, Wis. coming together and our wonderful partnership with the city of Green Bay," said Katie Bayne, President, North America Brands, Coca-Cola North America." While Coca-Cola is a global brand, this ad illustrates the deep roots it has in every community where it does business. We are in every city and every town across the country, ready to provide the kind of refreshing, uplifting moments of optimism Adrian enjoys after his journey to Lambeau Field."

This is the eighth consecutive year Coca-Cola commercials will appear during the Big Game broadcast. Coca-Cola worked with Wieden+Kennedy in Portland, Ore. to create “Going All The Way.” The spot was directed by Jake Scott and produced by RSA.