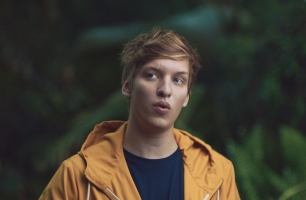 Shot over two days at The Eden Project, the video follows George Ezra filmed amongst glorious fauna in an intriguing and rather original way.

"We wanted to make something that was as soothing and sweet on the eyes as the song is to the ears. An effortless video that just drew you in.

I'd been playing a lot of Where's Wally online and watching old David Attenborough episodes and thinking about the time that Coppola directed a movie from a jacuzzi.

So we photographed him singing from hundreds of metres away on a giant zoom lens in the tropical environs of the Eden project.

We were going to dress him as various plants and hide him, but it felt too outlandish, so we made him fly instead, because everyone should."

The end result is a really subtle piece of film, warm and great looking with the monster zooms giving the piece an individual aesthetic; a unique take on a performance video capturing George in candid and uncontrived manner against a stunning backdrop.