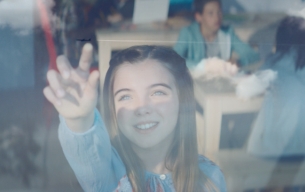 Fujitsu has released a beautiful film, showcasing the company’s impact on our world and the empowering effect its innovative technology can have in everyday life. Skydive reveals the layers of information and data that lie under the surface of the technology of today and tomorrow. Technology that allows us to live lives free to create and enjoy.

Richard Dorey and Mark McCall, Creative Directors at mcgarrybowen were enlisted to concept a film that dramatized the future society that Fujitsu are working to create. They engaged The Sweet Shop and director Ben Dawkins to bring the project to life, creating a film that places Fujitsu's human centric innovation in a warm, cinematic world.

Ben worked closely with Glassworks on all the graphical elements, working methods and animation. This hands-on, involved approach helped create a final film in which graphical elements fit seamlessly into the real world, accentuating the film’s message, rather than detracting with complexity.

“It was wonderful to feel so much passion from everyone involved from cast to crew to post,” says Ben. “It made the experience so much more rewarding on every level.” Paul Jordan, mcgarrybowen’s Executive Creative Director said "This is our third campaign for Fujitsu and each time the work gets stronger. Ben has beautifully portrayed the net human benefits of Fujitsu's technologies in a way that feels incredibly filmic.”

Spencer Dodd, MD at The Sweet Shop added “It was a true collaborative project and a joy to work closely with mcgarrybowen and Glassworks to make a film that takes us out of a clinical world and into a human one and that gives us hope in the future. We couldn’t be more pleased with the outcome.”