The second series of the hit drama premieres tonight at 9:00pm GMT on Sky Atlantic 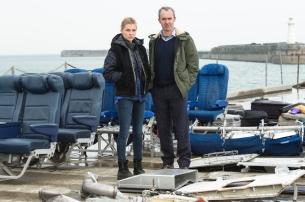 Returning for its second series, The Tunnel: Sabotage finds Commander Elise Wassermann and DCI Karl Roebuck reuniting to investigate the case of a French couple who are abducted from the Eurotunnel. But the case is complicated when a place crashes into the Channel killing all on board.

The score to this nail-biting series by by BAFTA-winning composer Ben Bartlett. Ben is revered for his RTS-nominated scores for television programmes such as The Ghost Squad (dir Richard Laxton), Mark of Cain (dir Marc Munden) and the BAFTA-winning Walking With Dinosaurs. He was recently nominated for a Music + Sound Award for his incredible score to two-part television movie, Lucan (dir Adrian Shergold) about the infamous Lord Lucan, of which the Guardian wrote "...Bartlett's music has been the crowning glory of the show".