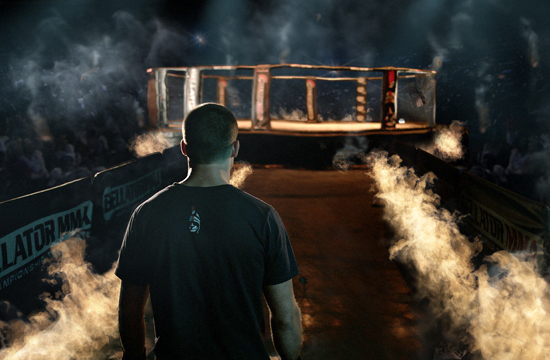 Bellator MMA, known as the toughest tournament in sports, returned to Spike TV this past weekend.  To promote the ninth season of the mixed martial arts competition, which is appearing exclusively on Spike for the second straight year, the network's executives once again turned to the creative force Juniper Jones, and its founder and creative director Kevin Robinson.

After working closely with Spike's creative team of SVP creative director Terry Minogue and creative director David Phillips to promote Bellator's eighth season last year, Robinson and his colleagues perfected an approach uniting original live-action footage with custom fire effects that together distilled the essence of the Bellator brand and experience.  The content from that :30 spot was used widely to promote Bellator on-the-air, online and on the Bellator app, on displays throughout stadiums during events, even on Jumbotrons outside of major sports arenas across America to promote upcoming events.  Knowing that this year's spot would again be a key promotional asset, according to Robinson, this year Minogue, Phillips and Spike's senior writer/producer Evan Harris wanted the spot to be larger and more grand.

"What we did last year was very successful," Robinson confirmed.  "The fire elements and the fire bracket have now become main branding points for Bellator.  Whereas last year's spot used fire in more ethereal form, this year we focused more on story, and using those effects to amplify the excitement that leads up to an actual Bellator match."

Working with a small crew and Bellator Featherweight Champion Pat Curran for principal on-camera talent, Robinson spent two days shooting on-location at a Bellator event.  To heighten the project's craftsmanship during production, the team chose to use three ARRI Alexa digital camera systems.  That footage was color-corrected in-house using DaVinci Resolve, Curran's movements were then tracked in 3D and the signature Bellator fire effects were then added to Curran's fists and the environment using FumeFX.

"We've learned first-hand that getting fire effects right is rather difficult," Robinson added.  "We take a lot of pride in the fact that we have honed this expertise that people respond so well to.  Combining it with flawless original cinematography really gives us a chance to create something spectacular."