Being NY’s ‘Power of the Peanut’ 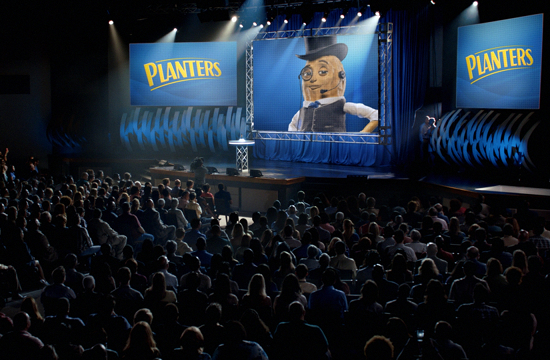 Peanuts are known to be a delicious snack, but not many know that the peanut is a strong and mighty legume, despite its size. Planters, America’s leading snack nut brand, is launching a campaign to remind people that peanuts – with seven grams of protein and six essential nutrients – are actually quite powerful.

In the integrated campaign by BEING New York, Mr. Peanut - voiced by Emmy Award nominated actor and former “Saturday Night Live” star Bill Hader - takes on the new role of a life coach who shares his affirmations with the masses to “harness the power of the peanut.” The three TV and four digital spots, which start airing this month, feature Mr. Peanut looking to inspire a motivational seminar audience where he reaffirms the nutritional benefits of peanuts and encourages them to “believe in its power.”

“Peanuts are even more nutritious than you might think. They are a nutrient-dense snack with seven grams of protein and six essential nutrients,” says Peter Cotter, Brand Manager for Planters. “Showcasing Mr. Peanut as a motivational speaker in this campaign creates a fun and entertaining platform that’s consistent with the Planters style, wit and charm while still communicating the wholesome benefits of peanuts.”

Planters also created a microsite – www.PowerOfThePeanut.com – that humorously depicts how the protein and nutrients from peanuts can help reshape every aspect of peoples’ lives: from their career to relationships to overall wellness. Launched on August 10, the site features “Success-timonials,” where people share their success stories of how they’ve used the power of the peanut – both personally and professionally.

The campaign, created by BEING New York, will also include three print ads and online banners. To view the ads and the videos, visit www.YouTube.com/Planters.