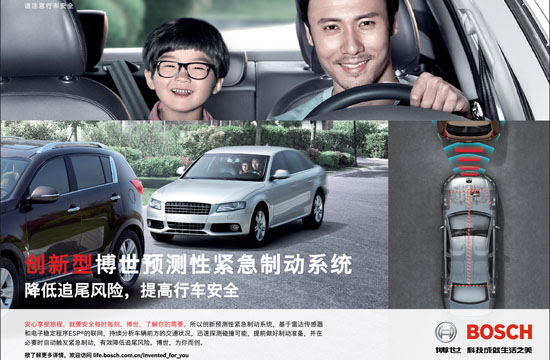 BEING, part of the TBWA Group of companies, recently launched the new corporate campaign and positioning for BOSCH China, “Invented for life”.

BEING won the corporate advertising assignment for BOSCH China earlier in 2013.

The campaign aims to enhance BOSCH’s brand awareness in China, as well as establish BOSCH as a leading technology company – demonstrating that BOSCH offers products and services, which are “invented for life”. This new orientation focuses on the benefits of the BOSCH’s innovations in everyday life.

The creative idea shows how BOSCH understands the needs of the people and puts the human benefit at the heart of everything it does. The films focus on people, showing, in a heartfelt way, how BOSCH’s technology affects people’s lives positively.

In the first of three commercials, the predictive emergency braking system of BOSCH is visualised. A high-class refrigerator with innovative hybrid-cooling system and Vita-fresh technology are the highlight of the spot for BOSCH’s home appliances. The third film focuses on BOSCH new impact driver wrench, which allows a fast switch between screwing and bolting.

Shel Liu, General Manager of BEING China commented: ”We are thrilled to be helping this famous German brand become even more relevant to Chinese consumers. Our goal is to enhance understanding of how BOSCH technology is ‘invented for life’.”

For the campaign, BEING China collaborated with TBWA\Germany. Ian Thubron, President TBWA\Greater China, and Dr. Sven Becker, CEO TBWA\Germany commented: “We were delighted with our success in winning the BOSCH business. The strong cooperation between Shanghai and Dusseldorf was one of the reasons why we were awarded this account.”