Behind Maltesers’ Paralympics Campaign – and How It Struck Comedy Gold 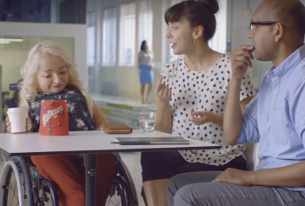 A nuisance dog on date night. A bit of bedroom improvisation. A wedding do disaster. The latest spots in the Maltesers ‘Look on the Light Side’ campaign is a collection of toe-curlingly relatable scenarios straight from the Bridget Jones school.

But the spots for the 80-year-old brand of malty chocolates from Mars, created by London agency AMV BBDO and directed by Biscuit Filmworks’ Clay Weiner, are also notable for another reason. All three were created in response to Channel 4’s challenge, issued during Advertising Week Europe to the marketing and advertising community, to improve the representation of people with disabilities. And so the spot stars actors with disabilities and each is inspired by real life stories.

The campaign has had a huge response from the public and the press. Michele Oliver, VP of Marketing at Mars Chocolate UK has been blown away by the positive feedback this week. “We’re delighted the new adverts have had such a great reaction - we wanted our take on the lighter side of living with disability to start a conversation and it certainly has! A fifth of the UK population live with a disability and we hope that the new campaign will see more adverts reflect the true diversity of the great British public in the future.”

Back in April, Channel 4’s Chief Marketing and Communications Officer chastised the industry for its unrealistic and unrepresentative approach to disability, announcing, “It’s almost as if disabled people don’t exist in adland.” Not content to simply talk about the problem, the British TV channel said that it would offer £1 million of free advertising space during the Paralympic Games’ 2016 opening ceremony to an idea that would represent disability. They invited brands, agencies and production companies to submit scripts. On Wednesday night, the winning campaign aired.

The response to the competition was overwhelmingly positive, says Channel 4’s Sales Director Jonathan Allen. “The initial reaction was amazing and really positive as the prize acted as a catalyst to focus existing thinking and feelings around diversity in advertising,” he says, noting that the entrants bought into the spirit of the competition. “The breadth of ideas and the true nature of what the brands and agencies wanted to achieve around disability - there were virtually no entries that were just tactically chasing the free airtime.”

One of the brands to take up the challenge was Maltesers, who tasked their agency, AMV BBDO, with devising an entry. David Buchanan, Deputy Chairman and Creative Partner at the agency was, at first, unsure about the suitability of combining Maltesers’ bubbly humour with an issue like disability. It was, he says, the start of a journey that proved to be an education.

“In all honesty my initial reaction was one of scepticism. In our case, were we being asked to use disability to sell Maltesers? Was it right to be humorous about disability? I was completely wrong on both counts.”

From the off, the agency was adamant that it wasn’t going to approach the creative with pity or patronising admiration. Catriona Collins, Strategy Partner at AMV BBDO, says that the driving thought behind the campaign was not to ‘put disabled people on a pedestal’ and to be human and real. And from a branding point of view, it was unthinkable to deviate from the light-hearted tone of Maltesers – which David says would have been ‘change for change’s sake’.

But what of the creative? The stories are funny. One shows how one woman puts a positive spin on a spasm during sex, another details a wedding party mishap in which a guest runs over the bride’s foot with her wheelchair, and another sees two teachers discuss, using sign language, what happened when a greedy dog wolfs down a hearing aid. And they’re all true.

“Being non-disabled I knew virtually nothing about disability so, with the help of [charity] Scope, we set up several workshops with people with differing disabilities,” explains David.  “This proved invaluable in writing the scripts. Amongst many things, I learned that, at some stage, everyone in a wheelchair has run over something, hearing aids can get knocked out and people with certain conditions can have involuntary spasms at inopportune moments.

Director Clay Weiner at Biscuit Filmworks was brought on-board to translate the comedic copy to screen. “I also discovered that just because you have a disability doesn’t mean you can’t have a sense of humour. “Clay did such an amazing job with the last set of Maltesers films we made. He was an easy choice. He casts and directs performance brilliantly and he totally gets the Maltesers brand,” says David.

Having directed previous spots in the Maltesers campaign, Clay was very clear that he would be approaching the ads in exactly the same way, with the same tone of voice and humour as before. "I’ve been honored to direct other Maltesers campaigns and the approach was basically the same here. Our industry has historically portrayed disabled people in such limited ways, if at all, but they have lives and experiences just like everyone else – there’s no need to treat them differently or more gently. I praise Mars for having to the courage to understand this and find avenues to further enliven their voices. The brand is willing to be bold. And dramatic. And I think that’s what it takes in today's landscape to make work worth watching.

For Clay, the casting experience was one of the best he's had - and that's not just because of the unlimited supply of Maltesers. "It was one of the best castings of my career thus far quite frankly. I mean, as an overall experience. We uncovered such unique talent and fascinating personalities," he says.

One script in particular proved exceptionally interesting from a performance point of view - and that was 'Boyfriend' when he had to work with the actors not on their spoken delivery of lines but their physical delivery of the signs. "I tried a bunch of strategies. I learned to talk slower and made my lips more readable. For a few days I stopped talking with food in my mouth. (Mom.) I tried to speak with my hands – although I do that quite a bit anyhow. And finally, the actresses both really got it. Like deep down, they both have hilarious souls," he says.

The team at Channel 4 embraced the humour – and the cheeky innuendo of the bedroom spot was no challenge to the broadcaster. “Well, we are Channel 4, so we loved it!” says Jonathan. “However, the agency and Mars also took expert advice working in partnership on the campaign with disability charity Scope, to ensure that we were not crossing the line, however it may create some level of debate, which is also an important element of what Channel 4 is here to do.”

Aside from the humour and humanity, there’s another decision that gives the campaign an edge and drives home the point of how poorly represented and included people with disabilities are when it comes to advertising. Usually marketers want their TV advertising to break through to the widest possible audience, but Mars and AMV BBDO decided to show the spot featuring two signing teachers without subtitles at its first airing.

“The first time this ad is aired it will appear with no subtitles at all - the first ad of its kind in the UK,” says David. “One of the frustrations of someone with a hearing impairment is a feeling of social exclusion. This ad turns the tables. For once, only the people who can sign will be in on the joke and all the people who can hear perfectly well will be excluded from the conversation. It will be interesting to see how they feel being left out.”

Jonathan Allen at Channel 4 hopes that the subtitle-less spot will grab the audience’s attention. “I think one of the most important things to do in advertising is to get people to sit up and take notice. We are actually running this ad with no subtitles initially, which we hope will be both intriguing and grab people's attention - the idea and the context it is shown in will also hopefully deliver a multiplier effect.”

And that potential ‘multiplier effect’ is the most important thing about Channel 4’s challenge and the Maltesers spots. After all, the point of the competition was to underline just how able-washed advertising is – in England 18% of people have a disability but these people are almost entirely absent from creative executions. The hope is that the campaign will inspire others to question their biases and blindspots beyond the Paralympic Games.

“Diversity generally is really important in both our editorial and our advertising to properly represent and reflect the population at large,” says Jonathan.

Channel 4, with its remit to take creative risks has been a leading force in its representation of disability on British screens. “I think most people are trying really hard to change things, but they take time to develop and there are a number of executional challenges, however, we hope we can be a positive force within the wider effort.”

Says Clay, a director who is always on the look out for interesting people to perform in his films, he found the experience refreshing - and hopefully the ads will persuade other directors and casting directors to be more open minded. "I'm a huge believer in casting in the most unique ways possible. This project was a chance to embrace that and push it even further. A.B.C. Always Be Casting."

As for David, he hopes that other marketers and ad industry professionals will rethink their own approach. “I think other clients can learn just from watching these films and they should also consider how incredibly brave it was of Mars to give us all the support that they did. It just shows what can be achieved if you’re prepared to take risks.”