Behind the Work 128 Add to collection 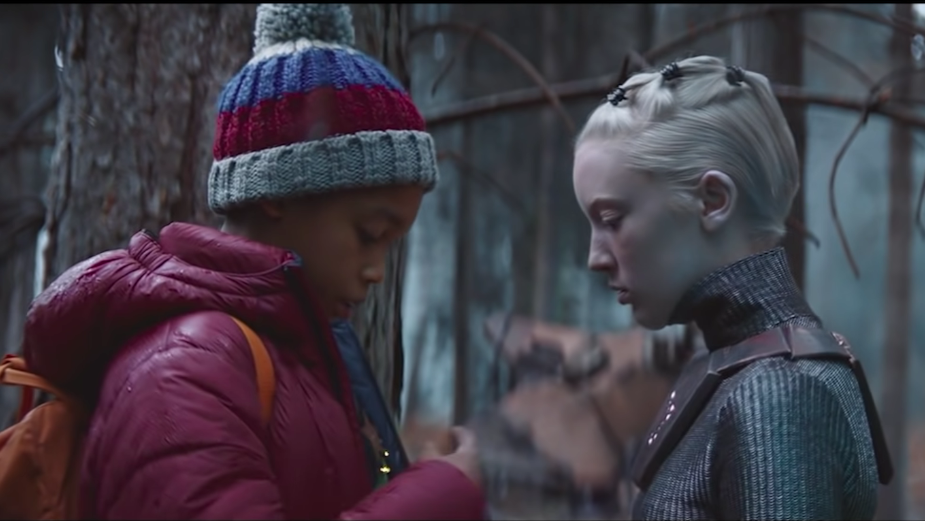 The John Lewis Christmas ad is a hallmark of the seasons changing and the festive holidays approaching. This year, adam&eveDDB took us back to a time where we remembered our first love, saw things we’d never seen before and left us with that warm, fuzzy feeling inside.
In the campaign, Nathan meets Skye, an alien who’s found herself shipwrecked in the forest. At first tentative, Skye and Nathan eventually warm to each other as Nathan shows her what Christmas is all about. Fom twinkling lights on Christmas trees to mince pies, the interactions are heartwarming to watch.
As Skye finally fixes her ship, we’re left with the bittersweet reality of the pair being from two separate worlds, but being left with shared memories together. Skye leaves with Nathan’s jumper and a twinkling light takes us to the end.
Talking about the pre-campaign crash-sites that created a conversation and process behind the campaign, adam&eveDDB creative directors Matt Gay and Feargal Ballance, speak to LBB’s Nisna Mahtani.

LBB> What were your initial thoughts when it came to the ideation of this Christmas campaign?

Matt & Feargal> We all haven’t had a proper, free-flowing Christmas for a couple of years and we wanted to create something that showed what it was like to experience that again or, if possible, even to create something as magical as your first. This is when we fell upon the idea of our alien girl; someone who knows nothing of the season and we can see its wonders through their eyes.

LBB> The John Lewis adverts are synonymous with the festive season nearing. Was there anything that you were mindful of avoiding or including in this year’s ad?

Matt & Feargal> Last year our advert clearly spoke to the times we were all living in with our ‘Give A little Love’ campaign. This year we wanted to create some magical escapism. A break from the news cycle for just a moment, but not lose sight of the message of kindness and reaching out to others.

LBB> What existing pieces of work, video or storyline inspired your creation of this particular advert - where did your influences come from?

Matt & Feargal> Of course there are lots of sci-fi movies and resource material of aliens coming to earth, but we worked with Mark Molloy to try and create something truly unique. From how the ship first appears across the sky, to its design and lack of slickness, her suit and her appearance and then the sound design.

LBB> Can you tell us a little bit about the editing process and what was involved in making the video cohesive from start to finish?

Matt & Feargal> We knew we had a good story on our hands and wanted to work with someone who could best bring this to the screen and do it beautifully. So, we were delighted that Mark Molloy, a master storyteller, wanted to work with us and bring this to life. From the start, we all had the same vision and Mark then executed it in such a way that was far better than we had hoped. And with Mark came the editor Stewart Reeves - something of a magician - who fitted in all asks without our edit ever losing the story.

LBB> Are there any other moments or aspects of the campaign that you’d like to tell us about?

Matt & Feargal> The campaign launched two days before the advert went live with two special-build crashed spaceships, one in London and one in Newcastle, with simply ‘Christmas is landing’, the launch date and the campaign hashtag #UnexpectedGuest, written next to them. This started everyone - news networks, press and people on social media wondering if this was John Lewis. This resulted in John Lewis trending number two on Twitter before the ad had been realised. Which was nice.
view more - Behind the Work