Behind the Work 56 Add to collection

Barbour’s head of brand Leanne Forster and the againstallodds team from Passion Pictures, speak to LBB’s Nisna Mahtani about Paddington’s adventures with Barbour 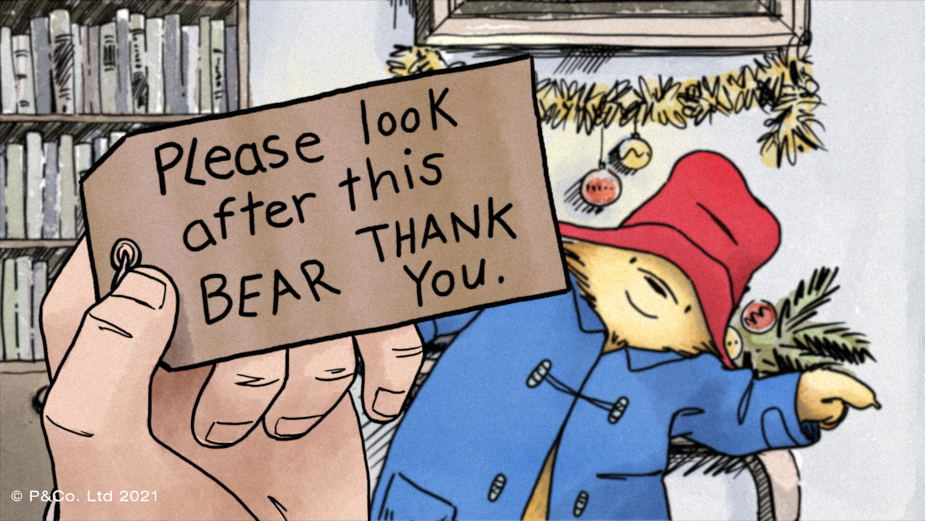 When we think of Christmas we think of presents, but it’s the thought behind them that really counts. In Barbour’s Christmas spot this year, Paddington Bear is seen ticking off his to-do list for presents, but when he comes to Mr Brown, he’s left short - oh dear!
In an attempt to share the festive spirit, Paddington searches through his memories, landing on a nostalgic moment that inspires his gift for this year. Rather than choosing to buy something new, he takes Mr Brown’s classic Barbour jacket and rewaxes it for him, a sustainable and thoughtful alternative. The campaign remains sentimental, considerate, and of course, in keeping with the holidays.
The Peggy Fortnum animation style used by Passion Pictures is in keeping with the original illustration for Paddington and has never been brought to life in this way. As a result, the team painstakingly digitally drew every frame that we see in a 3000-hour process that was certainly a labour of love.
To talk through the touching Christmas campaign, Barbour’s head of brand, Leanne Forster and the Passion Pictures, againstallodds team, spoke to LBB’s Nisna Mahtani.

LBB> What was the brief for the piece?

Leanne> Our brief was to put Barbour front of mind at Christmas and to get both press and customers talking about Barbour at the busiest commercial time of the year, with a standout idea. It was also very important to focus on our sustainability credentials and show how our products are made to last and highlight the centenary of re-waxing which we are celebrating this year.
Like all our Christmas campaigns, creating an emotional connection was important. Many people who have had their Barbour’s for years see it as an old friend. It has memories associated with it. There’s a lot of nostalgia wrapped up in our brand just as there is with Paddington Bear so it felt like a very authentic partnership.

LBB> What did Barbour want to convey this festive season?

Leanne> This campaign was all about representing what is truly important at Christmas time, spreading and celebrating those small acts of kindness that truly make a big difference and that it really is the thought behind the gift that counts. We wanted to focus on the real reasons behind gift-giving which are ultimately to show those closest to us how much we care and in this particular case, in relation to Paddington, to say thank you for the act of kindness Mr Brown and his family showed him when they first found him at Paddington station.

LBB> How was the brief interpreted and what were you keen to include within the campaign?

Leanne> We were delighted with the interpretation of the brief by Thinking Juice and Passion Pictures. The final film included all aspects of the brief. It was important for us to tie the campaign into a brand service that is unique to us, our Wax for Life initiative and to focus on our re-waxing and product services in a sentimental way. This year, we also had supporting children’s products as an extension of the collaboration and were able to use some of the graphics from the film as motifs on tees and sweatshirts.
The style of the animation was also incredibly important to get right, we wanted to pay homage to the original Peggy Fortnum style of illustrations which had never been animated before. We knew this was going to be a challenge as none of Peggy’s illustrations of Paddington were the same. Therefore, there were many iterations in the early stages to make sure that we were staying true to Peggy, whilst also making the animation look and feel relevant for today. We’re incredibly pleased with how it turned out and being able to bring Peggy’s version of Paddington to life and offer that unique, never seen experience to Paddington fans. 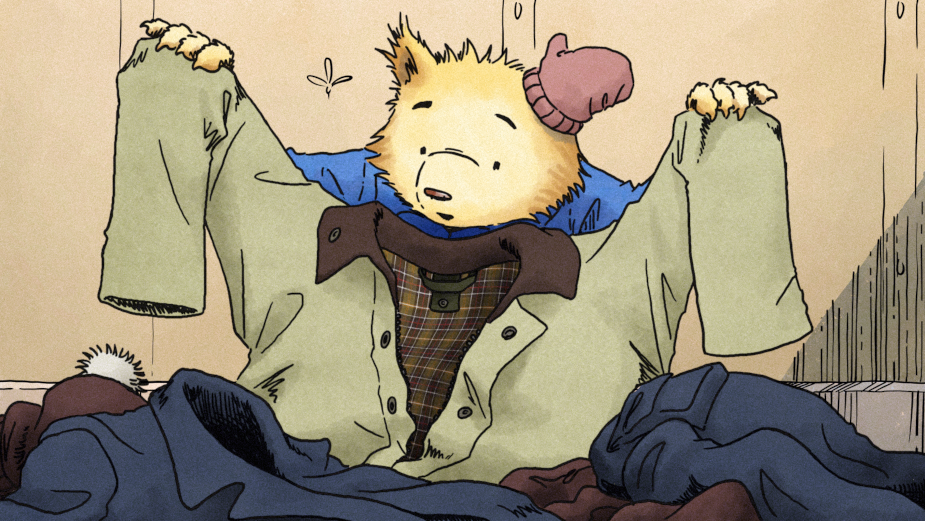 LBB> You use the Peggy Fortnum style of illustration to bring Paddington to life. Were there any unique challenges with choosing this style?

againstallodds> Peggy Fortnum’s style is so iconic, and so unique, that bringing it to life in animation for the first time was a challenge that we relished. As it had never been seen in motion before, we had to start from scratch to work out our own method for achieving the perfect look whilst giving each character performance and movement.
Peggy Fortnum was very free and loose with her style, so we had to settle on one ‘Peggy Version’ to animate and go from there. Once we had our selected look, then it was about painstakingly recreating it, frame by frame. It was also rare to see full environments in Peggy Fortnum’s work, more suggestions, and vignettes of spaces, which didn’t work for this script, so we were very lucky to work with talented illustrator Evgenia Malina who created the Brown’s house and Windsor Gardens in close reference to Peggy’s style.

LBB> Each frame was hand-drawn, a painstaking process taking almost 3000 hours. What were the most rewarding frames to see animated and why?

againstallodds> When we first brought everything together in one complete shot and got our first look at the full world we were creating for Paddington. This was line work, colour, texture, and backgrounds all being brought together from separate elements. Seeing them working in harmony for the first time was rewarding, especially as the first full shot we finished was Paddington rigorously waxing the Barbour jacket on the kitchen table!

LBB> Which specific scene took the longest to create and animate - can you give us an insight into the process behind it?

againstallodds> With the style of animation developed specifically for this film, there were lots of layers needed to create the look of each character. Because of this, the scenes where we see the whole Brown family together took the longest. There are several layers per drawing, twelve drawings per second, multiplied by 5 characters! The interior of the Barbour jacket also had to be hand-animated in a different technique to capture accurate product likeness with the iconic Barbour tartan. 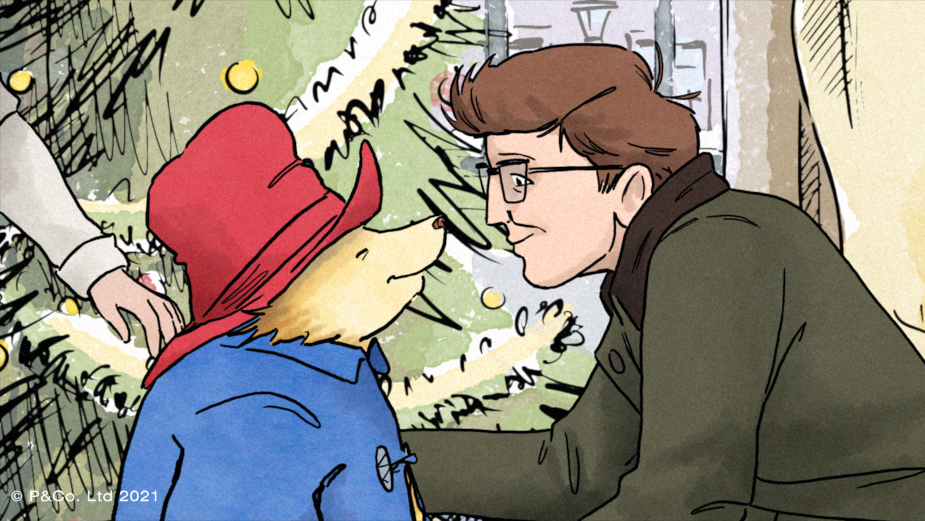 LBB> There are specific moving elements in each frame, such as the snow falling in the window and Paddington’s movements. How did you decide on which elements to animate and which to keep still, for maximum effect?

againstallodds> We definitely wanted to capture a ‘handcrafted’ look to the film but didn’t want it to feel distracting with flickering line work and paint effects, so we were mindful to handle it delicately. We added elements like falling snow and splashing wax to make sure the frames felt full of life without getting too busy and taking focus away from the characters who are the heart of the story.

LBB> Have there been any reactions to the ad that surprised you or were particularly memorable?

Leanne> We have had some lovely comments from our customers on our social media channels and via email. Some customers told us that the nostalgia in the campaign made them cry (happy tears) and one customer even recreated a scene from the film and sent it to us! It’s lovely to see how engaged customers have been with the film and the campaign.

LBB> Would you like to tell us about any other aspects of the campaign?

Leanne> This has been a fully integrated marketing campaign from PR and social through to our website, store windows, in-store displays and point of sale. Some of our wholesale partners also used the assets from the campaign thus extending its reach and awareness.
view more - Behind the Work 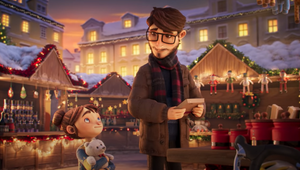 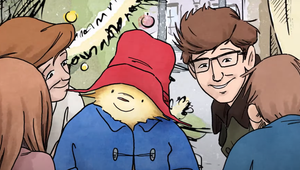 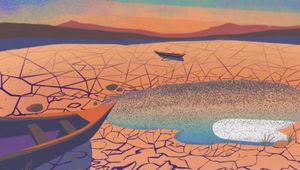