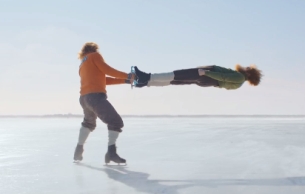 “Silver Skaters” features a pair of unconventional but spectacularly talented ice skaters and their evangelical coach, as they create an ethereal routine that looks – and sounds - unlike any other. Created to feel undeniably Swedish, and beautifully premium, with a touch of the quirky humour that Scandinavians are famous for. The idea was born out of the thought that there is something beautifully invigorating & refreshing about seeing someone skating on ice on a sunny day when the sky is blue. The skaters feel unusual, whilst genuine to the Swedish environment.

The aim of the ad is to drive awareness for Rekorderlig globally, connecting the audience with the skater’s story, as icons for the campaign, and a true embodiment of all that is 'Beautifully Swedish'.

The film was directed by Andreas Nilsson, the Swedish artist and award-winning director best known for his contributions to the music videos of 2 Chainz, The Knife, MGMT and Goldfrapp, and aims to capture the essence of Scandinavian style as part of the brand’s “Beautifully Swedish”

The campaign encompasses a 60 second film, a 30 second cut down, and 12 additional edits as part of a multi-layered social campaign retargeting consumers across Instagram and Facebook. Jon Henrik’s Swedish folk track ‘Reindeer Herder’ has been edited to create the eerily atmospheric soundtrack.

The work launches online on 10th July and will subsequently run internationally in cinema, online, OOH and in-store.