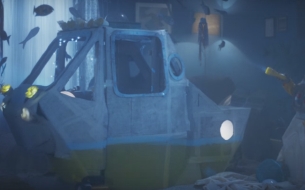 Once again, Greenpeace has teamed up with creative agency Don’t Panic to launch ‘The Little Explorer’ this time to put the spotlight on the impact destructive fishing trawlers have on the Arctic Ocean.

Last week at a major seafood conference in Bergen, Greenpeace revealed a groundbreaking investigation showing an alarming increase in destructive fishing vessels going further north than ever before to fish in sensitive and previously ice covered areas. Leading scientists have echoed Greenpeace’s concerns about destructive fishing vessels on the move into pristine new areas.

Joe Wade, MD and co-founder of Don’t Panic said: “This is the latest in an exciting series of videos we have created for Greenpeace as part of their Save the Arctic campaign. We saw amazing success with 'Everything is NOT Awesome' and we hope to raise similar awareness with the 'The Little Explorer'. For this video we have bought a child's imagination to life, to capture the true beauty of the arctic. It is fragile, enchanting and home to some of the most unique creatures in the world, but unfortunately it is now under threat due to destructive fishing which is completely destroying life under the ice. We must stop this and join Greenpeace in their fight to protect the Arctic".

Isadora Wronski Arctic campaigner at Greenpeace said, “The success with “Everything is NOT Awesome” showed how impactful online video content can be to raise awareness of important issues globally, and drive real engagement. It is vital to secure the future of the Arctic Ocean’s fragile ecosystem, and this video will get that message across to millions worldwide.”