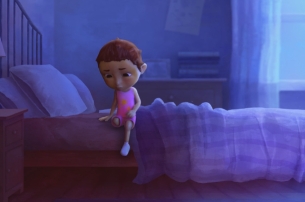 Music shop Hook+Line shines light on the struggles and triumphs of individuals most reliant on the progress of Cancer research in a poignant animated short for Scarlett Contra El Cancer. The colorful short, produced by the animation company the STUDIO, finds a despondent little girl in the wake of an amputation, searching for a way to feel like she did before the life-changing surgery. Though initially thwarted by her physical limitations, she conquers, discovering an elegant freedom in embracing her struggles through dance. Hook+Line crafted an original song with a cinematic score and poignant vocals that drive the emotion and inspirational narrative of the short animated piece. The impactful piece has already garnered 1.2 million views internationally since its launch. The short is also receiving an outpouring of support from the amputee community, with personal stories being shared through the "Amputee Coalition of America" Facebook page in response to the video.

“The challenge for us was striking the right tone, both lyrically and musically. The song couldn’t be too sunny or anthemic; it needed to feel raw and real, and draw people into Scarlett’s journey and determination to ‘keep on going,” said Hook+Line Partner/Songwriter Abby Diamond.

The original song was co-written and produced by Hook+Line Partner Abby Diamond, who brought in collaborator Kyle Patrick, as a cowriter and producer. Patrick mixed the song and Diamond recorded the vocals, which she noted are performed “almost a whisper.” Hook+Line Owner & Creative Director Bryan Senti lent his talents on violin.