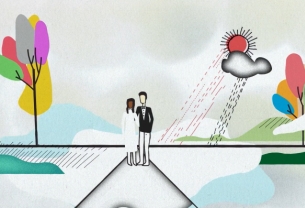 Told through illustrative animation, this is the true story of a woman's struggle to over come her reproductive health issues and have the family she has always wanted. Featuring narration from an interview with the woman herself, this an inspiring animation that tells her story from deepest woe to greatest joy.

Barnardo's approached Nice and Serious to make an animation that communicates the benefits of adoption for both children and perspective parents. Not many people realise that Barnardo's can play a key supportive role in the adoption process, so they wanted people understand that if they are considering adoption, Barnardo's can help. In particular, they wanted to target people who had been unsuccessful with IVF treatment. After watching the film, people would be encouraged to visit the Barnardo's website to get more information about the subject.

Nice and Serious commented on the film: "After an initial conversation with Barnardo's, we realised that there were already some amazing true stories of successful adoption, and since we prefer communicating through stories, we decided to base the animation on one of these. Normally we would write an animation script and commission a voice over artist, but in this case we knew that this would diminish the authenticity of the story. We knew we needed to tell the story in the words of the real people, so decided to do something different from the typical animation.

"After coordinating with Barnardo's to identify the right family, our director visited the family and interviewed the mother about how she came to adopt a child with Barnardo's. Her story, told in her own words, was then brought to life with a colourful and textured style on animation that reflected the mood of different parts of the story. Finally, as a key element of the piece, we choose not to reveal that the child had been adopted until the very last sentence in the film. We felt this highlighted the fact that, ultimately, a family formed through adoption is no different to any family, the joy of bringing a child into your life and the family bond that is created is the same regardless of the means".