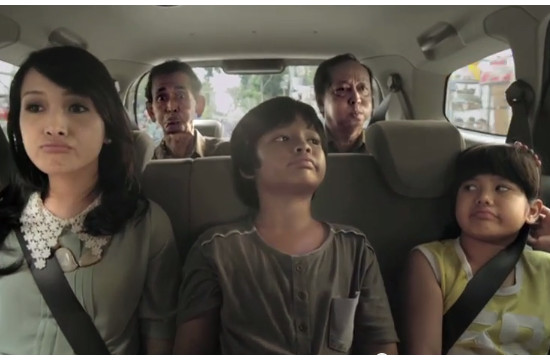 The Chevrolet Spin turns a family’s ride through the city into a fun adventure as they beat box sounds of the automobile to accompany their trip. Commonwealth Bangkok’s latest spot titled “Beatbox” is running in Indonesia as part of the “Spin Some Fun” integrated campaign.

To illustrate the tagline “Small engine, big fun,” the spot capitalises on the seven-seat sub-compact van’s quiet engine. All sound effects in the commercial were created solely by human beat boxing. Directed by Luci Shroder of Sweet Shop, the Spin is shown to unite a family in a fun manner as they “Find New Roads.”

“In a world where technology dominates, it was refreshing to go “old school” and use human voices alone to make all the noises of the car. The cast was fantastic and thanks to the coaching of professional beatboxers, they were able to deliver a solid performance for total amateurs, bringing the message of the commercial very much alive,” says Thierry Halbroth, Executive Creative Director of Commonwealth’s Bangkok Hub.

The “Spin Some Fun” campaign is running on TV in Indonesia and supported by a full social media campaign that will run till January and invites audiences to join in with the hashtag #SpinSomeFun. Trailers follow the launch of “Beatbox” to illustrate the campaign’s concept and promote a contest, which launches 18 November.

The Chevrolet Spin is the newest model to launch in Southeast Asia and has broken sales records this year, representing over 60% of Indonesia’s total sales.