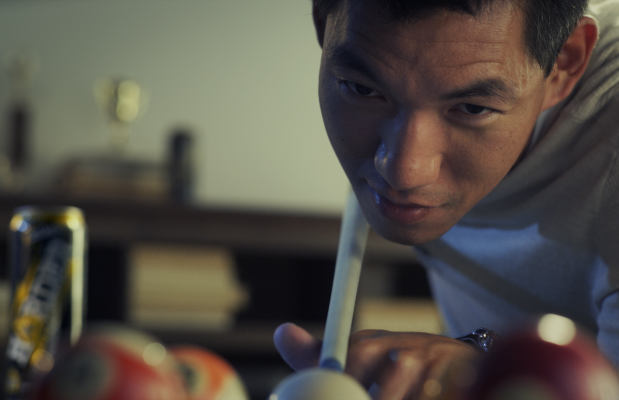 For each of the spots, the goal was to set up a seemingly ordinary situation, hold for just long enough for the viewer to think they understand what’s going on, and then immediately turn it on its head. But rather than relying on a cut from a deceptive close-up to a wide shot, director Colin wanted to get each spot’s 'reveal' done in-camera, within a single take.

Colin Read commented: "The project was a lot of fun because each of the three spots called for a totally different shooting approach - which required us to figure out a unique tool set for each. But my favourite - and the hardest - one to shoot was the 'Cue' spot. Not because of any technical or camera reasons, but because the action shown really was a type of trick shot, involving a lot of different moving pieces.

"Although the talent, Tim Chin, really is an amazing trick shot artist, he wasn’t able to curve the ball quite how he needed to, since our giant billiards 'carpet' didn’t respond the same as an actual pool table. So we went with our prepared backup plan: a leaf blower! Tim shot the ball toward the camera, and a leaf blower waiting off screen (snooted so that it didn’t disturb anything else) gave the ball a quick blast to push it in the direction we wanted. It then went through legs, under a table, and toward the waiting can. Everyone on set got really into it - getting excited when the ball got close to hitting the can, and breaking into cheers whenever it knocked it over. In the the end, it looked just how Tim’s trick shots really look - the ball goes straight until the spin catches the table, and then it careens in a new direction. Sometimes the lo-fi solutions are the best ones."