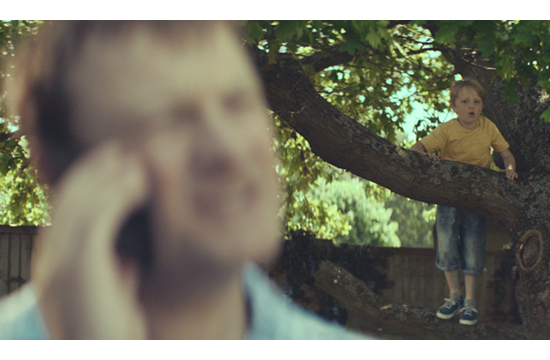 Tonight, Monday 16 September, St John Ambulance will launch its emotive new ‘Save the boy’ campaign, created by BBH London. The 60-second film is based on the fact that, although there are thousands of lives saving St John Ambulance volunteers, they can’t always be there when we need them so we all need to learn first aid. The film is supported by an interactive experience that immerses users in the story and demonstrates some simple first aid, which can be the difference between life and death.

In the film, a boy and his father play in a garden as a woman, who we assume to be the mother, seemingly looks on through the kitchen window. The boy climbs a tree but a branch breaks and he falls to the earth with a sickening thud. The shocked woman runs out of the kitchen as we hear that she is a St John Ambulance volunteer, with the first aid knowledge to save lives. But as she reaches the garden we realise she has no connection to the boy and his father after all but has rushed out to take her washing in from the rain…meanwhile in the empty park the boy is unconscious with the dad screaming for help, as viewers are implored to find out how to save the boy.

Viewers are urged to visit www.sja.org.uk/savetheboy to be taken to a multi-platform interactive experience where they can save the boy. On their smartphone or on the desktop they will then be asked to swipe the screen or click a mouse at various points to help the father carry out first aid and move the boy into the right position to enable him to survive.

The film was directed by Dougal Wilson, the esteemed director behind the John Lewis commercials and the recent Three ‘Pony’ film. Wilson leant his support to the campaign after being in a life and death situation and not having the skills to help.

The interactive experience was designed by BBH London and built by Monterosa, the award-winning global mobile agency acquired by BBH earlier this year. Media planning and buying for the campaign has been handled by John Ayling & Associates, with St John Ambulance’s in-house team and GolinHarris collaborating on PR and social media.

Sue Killen, St John Ambulance Chief Executive, said: ‘Unfortunately, our volunteers can’t be everywhere so we’ve developed an online experience to help more people be the difference between a life lost and a life saved. We don’t want anyone to be helpless in a first aid situation especially when learning life saving skills is so simple.’

Emma Sheppard, Acting Director of Brand, Communications and Fundraising at St John Ambulance, added: ‘We want this campaign to build on the success of our previous brand work. Our last campaign, ‘Helpless’, equipped tens of thousands of people with first aid knowledge and saved at least four lives. But, still, we’re in the situation where two-fifths of people say it would take the death of a loved one to make them learn. We hope it makes people realise the importance of first aid and that they get involved and help save the boy.’

Dougal Wilson, the director, commented: ‘When I was asked to get involved in this campaign I was already committed to another project but it proved hard for me to turn down. I had an experience myself where someone needed my help and I didn’t know first aid, and I will always feel that I could have done more. By putting other people in this position through the film, and then teaching them how to save the boy with the online interactive experience, we hope to avoid anyone having that feeling of helplessness in real life. First aid is so simple to learn and I hope this encourages more people to be the difference between life and death.’

The campaign was developed after research from St John Ambulance showed:
- Two-fifths (41%) of people say it would take the death of a loved one to make them learn first aid
- Over half of parents (55%) lack the skills necessary to save their child in the event of a life threatening accident
- Instead of intervening and putting the boy in the advert into the recovery position, which would save his life, most people (57%) fear doing something wrong and would do nothing until the emergency services arrived, when it may be too late.

The campaign continues St John Ambulance’s hard-hitting new direction. The brand’s last campaign, ‘Helpless’, which was also created by BBH, compared a lack of first aid with cancer showing up to 140,000 people die each year in situations where first aid could have helped save their lives, which is as many as die from cancer*. The campaign ultimately encouraged tens of thousands of people to learn first aid and saved at least four lives.

Visit www.sja.org.uk/savetheboy to take part in the interactive first aid needed to save the boy.