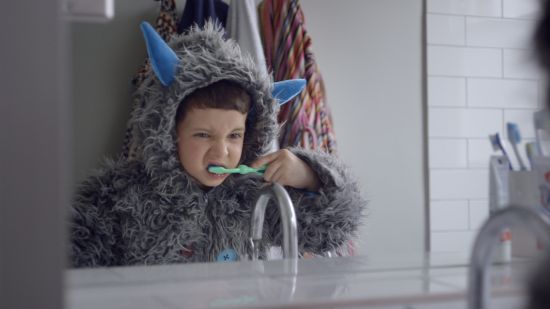 Over the weekend of the 10th and 11th May, Twickenham will host the Marriott London Sevens. The event is unlike any other in rugby. The crowd are encouraged to dress up, have a few drinks in the stand and create a carnival atmosphere. This year the theme is ‘Monsters’, and there will be an increased emphasis on family attendance.

Rather than focusing on the intense adrenaline-fuelled game of rugby, the new campaign dramatises the fun and silly side of the event by using a genuine human insight; most children go through a stage of never wanting to take off that special fancy dress outfit.

The film, ‘Monster’, follows a young boy who loves his monster suit. We see him going about his daily business (at the barber, in bed at night, brushing his teeth in the morning, at the butchers etc), and he never wants to take it off. He can’t believe his luck when he comes downstairs one morning to find his parents in similar monster outfits, ready for a fun day at Twickenham.

The film will appear on TV around related rugby and sports programmes and will be seeded online.