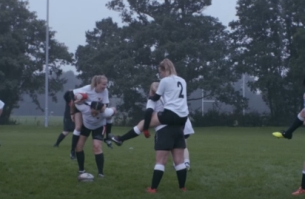 The Rugby World Cup may have finished, but its legacy has just started. For the tournament to live up to its potential and be a real success, it needs to inspire a new generation to take up the sport.

England Rugby continues its national campaign to break down barriers associated with rugby and attract new players to the game with a new online film called “Balls To Stereotypes.” The film, which launched on Sunday, follows a cast of real amateur players who challenge rugby stereotypes on a journey to their respective clubs.

Online print portraits of the players appearing in the film support the campaign on social media, each with a stereotype shattering message of their own.

An online documentary series made in collaboration with VICE Media runs alongside film. The five documentary-style films elaborate on the players celebrated in the hero commercial, including an inclusive rugby team, called The Manchester Village Spartans, and some of their gay players.

The work is part of England Rugby’s ‘We Call It Rugby’ campaign, which launched at the start of the Rugby World Cup with the goal of driving participation and re-engagement amongst 16-24 year-olds in England.

All communications lead to findrugby.com, a site which encourages people to locate their nearest rugby club.

Lawrence Dallaglio, Founding Partner, BBH Sport, said: “I was privileged to be part of the original bid process back in 2009. Our ambition was to use England 2015 to create a 'step change' for rugby in this country. Well now is the moment.

We have seen ticket sales of over 2.4 million, Fanzones attended by nearly 1 million people, millions engaging digitally and socially, and the world has tuned in with record viewing figures.

But the greatest legacy of this tournament will be if playing, coaching and participation numbers go up.

Rugby really is a game for anyone - any age, any background, any size, any skill level. Working with the RFU on the back of this fantastic tournament, we want this campaign to encourage people to get down to their local clubs and get involved in this great game.”

Nic Fletcher, Head Of Marketing, RFU, said “Legacy has been the most important aspect of hosting a Rugby World Cup on home turf for us and this campaign capitalises on our responsibility to grow the game in England. We are delighted to have seen so many different people get involved in the tournament, many of them new to rugby, and our programmes off the pitch are bringing new players from all backgrounds into the sport. We Call It Rugby reinforces how rugby really is a game for everyone.”