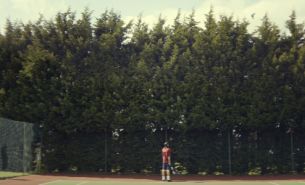 The Lawn Tennis Association (LTA) today announced the launch of their first-ever brand campaign, Go Hit It, in an effort to encourage more people across Britain to pick up a racket and play tennis more often. It is a rallying cry to evoke the feelings of tennis, be simple and fun and demand action.

Created in partnership with BBH Sport, the Go Hit It campaign will launch across TV, radio and Out of Home from today (Friday 20th May 2016). The launch of the campaign looks to raise awareness of tennis earlier in the summer season and builds on the strong momentum behind the sport following the historic Davis Cup by BNP Paribas win last year.

The campaign aims to celebrate the one great shot everyone has in their locker, no matter what their standard, and remind them of their love of the game. The concept behind the TVC itself centres on amateur players playing a competitive game of tennis at their local park tennis court, with iconic commentary from the legendary John Barrett and sounds of a Grand Slam Final, further evoking the sense of an emotional connection any player can have when playing the game.

The Out of Home advertising uses the evocative language of tennis moments that all players experience when they play, whilst the radio advertising uses the unique sounds of tennis to engage listeners. Radio will encourage people to search for tennis in their local area whilst the outdoor ads will direct players to their nearest court. This will be accompanied online with geo-targeted weather based advertising.

The focus areas for the radio and Out of Home are Leeds, Liverpool, Sheffield and Manchester.

Alex Mawer, Marketing Director of the LTA, comments; “The Davis Cup victory at the end of last year really captivated the British audience and we want to continue on this high and encourage people across the country to get involved in tennis, earlier in the season and more regularly. Through Go Hit It we expect to kick start the summer tennis season with the more people thinking about tennis, more people choosing tennis and more people playing tennis.”

Lawrence Dallaglio, Founding Partner of BBH Sport, comments; "We're extremely excited about our partnership with British Tennis, and relish the task of getting more people playing tennis more often. The creative idea is to remind casual players that a game on a local court can be just as epic as a Grand Slam final. 'Go Hit It' celebrates the unique thrill of playing this brilliant game."

The campaign is aimed specifically at the two million adults in the UK, aged 18-34 years old, who would play tennis more often if they thought about this sport earlier on in the summer. It’s designed to remind the audience that tennis is fun, evoke joyful feelings about playing the sport and encourage people to get on a court and play. It is part of a two-year strategy with its first year focusing on targeted regions, and its second rolling out across the whole of the UK.

Go Hit It builds on the success of Tennis for Kids with Highland Spring, whereby the LTA offered 15,000 free courses for kids aged 5-8 to encourage them to take part in a sport that’s both fun and healthy, and can be enjoyed throughout their lives.