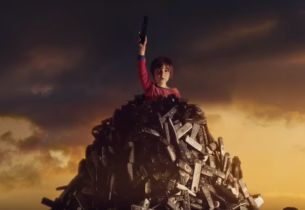 Today Virgin Media unveils its latest brand campaign which sees the company shift its focus to Virgin TV.  The campaign, which runs to the end of this year, marks a major programme of updates and changes to the Virgin TV service.

The campaign, called 'Masters of Entertainment', is spearheaded by a new TV ad, which will go live with a 60 spot in The X Factor on ITV on Saturday 10th of September and The Last Leg – Paralympics Special on Channel 4.

The creative concept of the campaign is based on the insight that the TV landscape has become increasingly complicated.  With a myriad of controls, programmes and ways to watch TV, parents finding that their children are more easily able to access content and navigate technology than they are.

In this fantastical world, the ad features six children, each boasting of the different ways they can work the TV; from which remote controls which box; to connecting the laptop to the TV; to finding a missed episodes across multiple channels as their parents get increasingly frustrated. They are the Masters of Entertainment - not the parents. The new  campaign has been shot to deliver an epic, cinematic feel.

The core message is revealed at the end – that it’s time to simplify TV with Virgin Media. Bringing the TV you love, brilliantly brought together by Virgin TV.

Kerris Bright, Chief Marketing Officer at Virgin Media, said: “This  campaign is the start of a major investment in building Virgin TV. These days, the telly we love is hiding all over the place.  The shows we want to watch are no longer just on live TV – they’re on a range of services, like Catch Up, On Demand or services like Netflix.  There is more to choose from, but you have to look harder to find the TV you love.

“That is where we come in.  We bring the best bits of the TV world together, no matter who made them.  The TV you love, the way you want it, brilliantly brought together by Virgin TV.”

Later in the campaign, additional 20” spots will go live illustrating specific product benefit messages around Virgin TV.  The first one of these will highlight ‘smart search’ on TiVo. It requires only the first letter of the programme title and the box does the rest to find the shows you love, whether they are on linear TV, on demand or OTT streaming services such as Netflix.

The new marketing campaign was created by BBH, with media planning handled by Manning Gottlieb OMD, and will also run in cinema, VOD, Display, Mobile, Social, Search and OOH.  It was directed by Traktor.  The TV campaign has been planned around family-programming in line with the creative and target audience.