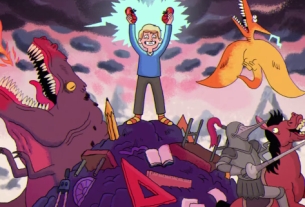 Clarks, the market leader in children’s shoes, has launched its Back to School TV campaign which aims to make the brand more relevant to kids.

Prepare for awesome switches between ‘real’ and animated worlds to provide a series of entertaining pep talks that aim to empower kids about going back to school. With it’s fast paced energy and colourful animation, Prepare for awesome is a distinct step away from traditional school uniform campaigns.

The campaign was created by BBH London and the four films were produced entirely by Black Sheep Studios, BBH’s next generation production studio.

The campaign was illustrated by Nick Edwards, the award-winning cartoonist who won an Emmy for his work on the Cartoon Network smash hit series, Uncle Grandpa.

Grand Central's Raja Sehgal created the sound design for the campaign: "This project represents a fresh, new approach for Clarks, and it's fair to say that it’s lead as much by the sound as it is by the visuals. After an initial meeting with the director and the creatives at BBH, I set out to create a soundscape that would really push the animation. The films started as a set of very basic line drawings, with the final animation being worked on right up until the very last day. We received an updated animation every couple of days and with that we had to create new sound to match."

The sound and visual together really feel like an attack on your senses; ultra-bright colours vividly combine with over the top textures in sound. We recorded lots of foley, including the shoebox, the paper explosions and the hits and knocks. The screams of the kids were manipulated to carry through each shot, to the very end of the spot. The tracklay kept evolving daily and with four films to do I enlisted Aaron Taffel at GCRS to do additional track laying in our new sound design suite."