BBH London Takes Baileys for a Global Girls' Night Out 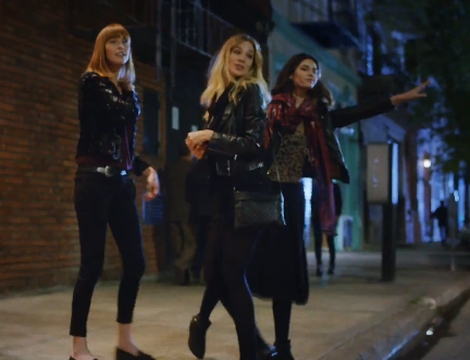 On Wednesday 19th November Baileys, the Original Irish Cream, launched a Global advertising campaign designed to introduce a new generation of Millennial women to the brand.

Created by BBH London, the campaign is a celebration of the power of female friendship and the great things that happen when girls get together. The new campaign also sees the introduction of a new endline, ‘Here’s to us’, which invites women to come together and raise a toast in celebration of all that they are to each other.

The launch TVC is the first series in the Baileys campaign that celebrates female friendships, expressed through an anticipated girls night out in different parts of the world.

Every girl in the world knows it. The tingly, bouncy, can’t quite wait, best shoes, fierce hair, sparkly eyed anticipation of a night out with your very best girls. You feel your best and you are your best; more confident, more adventurous, more spontaneous, more sassy, more ready than on any other night. The 60 second film celebrates that feeling and inspires the audience to get out there with their girls, wherever they are in the world and toast them with a Baileys.

The film was directed by thirtytwo at Pulse Films. It was shot in four countries around the world with an all female agency team and a largely female production team, including Autumn Durald, the Director of Photography.

The music to the film is ‘We got the beat’ by The Go Go’s, an all female American rock band formed in 1978. They made history as one of the first all female bands that both wrote their own songs and played their own instruments.

The film is accompanied by a print campaign which works to deliver delicious serve suggestions in a similar dynamic tone and attitude to the film.  Executed via the creation of a series of ‘epic toasts’ aimed to inspire groups of women to toast each other with Baileys, the campaign was shot by acclaimed fashion photographer Steve Heitt.

As featured in the new film, Baileys is introducing a new serve - Baileys shaken over ice and served in a shot glass. Baileys shots will be rolled out with different recipes such as the Birthday Cake (topped with whipped cream and sprinkles) or the Rich and Famous (Baileys and Smirnoff Gold, shaken with ice).

The campaign will launch in the UK, Western Europe, and the USA, before rolling out across other markets.

Caroline Pay, Creative Director at BBH London, commented: “Baileys was due a shake-up, a reintroduction to a new generation of women, a meaningful role in a girls night out - the brand having had been hidden at home for far too long. We had a lot of fun shooting this, and I really hope that comes across on screen.”

Ros Healy, Diageo Global Content Creations Director, said ‘This campaign marks the next phase in our exciting journey to re-ignite the true essence of the Baileys brand by celebrating the brilliant spirit of women. We wanted to shine a light on the insight that women bring out the brilliance in each other and hope that this TVC expresses that particular magic you feel when you’re with your best girlfriends, inviting women around the world to raise a toast with Baileys.’