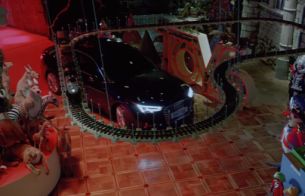 An Audi A4 embarks on a shopping spree around a department store in a light-hearted campaign, created by BBH, to raise awareness of quattro: the renowned all-wheel drive technology available across the entire Audi range.

The campaign, which launched on Saturday 16 July 2016 and spans TV, cinema, video on demand, social and print, tackles the misconception that quattro is only for extreme conditions or on certain models by sending it to an everyday location: the shops.

The 60-second film demonstrates the capabilities of quattro as it faces several ‘grip tests’ around the high-end store. Driving around the empty aisles, the Audi A4 effortlessly navigates a variety of traditionally tricky surfaces such as marble, ice, parquet, gravel and spilt milk, demonstrating the inherent benefits of quattro in a light-hearted way that is rooted in everyday life.

The message is made clear as the Audi A4 goes through the checkouts, the till reading: "All-wheel grip for everyday trips."

Sarah Cox, National Communications Manager, Audi UK, said: “This beautifully shot and entertaining campaign carries a serious message: that while cutting-edge Audi technologies are designed to work in extreme conditions, they are equally beneficial in everyday life too. It's a brilliant demonstration of how our ‘Vorsprung durch Technik’ philosophy informs every Audi model and benefits every Audi driver.”

The ad is further brought to life by the instantly recognisable theme tune, which has been reworked, from the fondly remembered 1970s BBC sitcom ‘Are You Being Served?’, famously set in a fictional flagship department store.

The film features dozens of well-known household brands, such as Eames, Fisher Price and Hornby, in order to give the store a sense of authenticity. The set design involved a vast amount of props gathered from ten cities across Ukraine, including 70 stuffed pandas, 150 kilos of candy and more than 100 lights in the lighting department.

Seven tonnes of toys were also shipped to Ukraine from the UK.  They were subsequently distributed to children’s charities in both countries after filming.

Ian Heartfield, Creative Director at BBH London, added: “Audi quattro is as useful on a shopping trip as it is in an avalanche. So rather than the cliché of a car racing across a frozen lake or down a muddy track, we thought we would demonstrate grip in a more entertaining way by driving the car inside the most 'everyday' location possible - a department store."