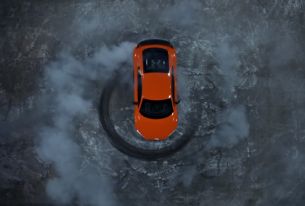 Audi launches yet another innovative advertising campaign for the all-new Audi R8. A new 60-second film, entitled Spin, captures the powerful grace of the stunning R8 Coupé V10 plus as it performs a perfectly controlled slow-motion 360-degree turn.

A Russian Arm camera, mounted on the roof, slowly pans around the R8, giving the viewer a close-up look of the Vorsprung durch Technik brand’s flagship performance car. The camera then switches to an aerial viewpoint, where we see the car precisely creating the first ring of the famous Audi logo.

The elegance of the R8 is highlighted by Dusty Springfield's version of Windmills of Your Mind - "Like a carousel that's turning, running rings around the moon" - taken from her classic 1968 album Dusty In Memphis.

Sarah Cox, National Communications Manager of Audi UK, says: "The R8 is the most advanced production vehicle Audi has ever produced. The Spin campaign, by comparison, is perhaps our most simple. The car's beauty, power and precision speaks for itself, just as our famous four rings are a guarantee of cutting-edge technological brilliance."

The film was directed by Mark Jenkinson of Rogue Productions. Ian Heartfield, Creative Director for BBH, adds: "When you have a car as stunning as the Audi R8 to sell, the task is simply to let it be itself. Hence we have an R8 executing a perfect spin that forms one of the four seminal Audi rings. An icon helps to draw an icon.  It's about as simple and impactful as it gets. We hope it will make people feel good about Audi the brand as much as it does the R8 itself."

The ad, carrying the tagline "Speed isn't everything", will feature on TV from 1 June and in cinemas from 23 June 2016.