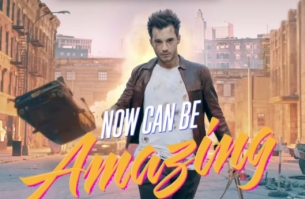 LYNX Hair styling and shampoos, the latest addition to the LYNX range of grooming products is kicking off 2015 with the release of a TVC that aims to help guys get the look with ‘less effort and more style’ using the LYNX Hair product range.

Hitting TV screens on 18 January 2015, the new campaign consists of a one minute spot and a 30-second cut-down that will air across the five metro capital cities (both free to air and pay TV) as well as online and was developed for LYNX by BBH London and Biscuit Filmworks.

Inspiring guys to experiment with the new LYNX hair products, the spot presents three key looks with a voice over emphasising ‘less effort, more style’. It irreverently tells one guy to make the most of his hair while it is still there – because having good hair surely helps you to be amazing in life.

LYNX Marketing Director Jon McCarthy says “LYNX Hair is all about helping guys get the look without any of the fuss. The new range makes hair care and styling simple for guys and that’s what we’ve tried to communicate in the spot, in our usual entertaining style”.

Launched in October 2014, LYNX Hair is a full suite of shampoos, conditioners and styling products that fulfils guys’ hair needs. The launch was supported by the release of the LYNX Hair ‘Mantorials’ – a four piece collection of tongue in cheek hair tutorials aimed at teaching guys how to get the Clean Cut, Messy, Natural and Spiked Up looks using the new hair styling products. The ‘Mantorials’ have clocked up a combined 300,000 views on YouTube and were widely distributed across digital and television platforms through October to December 2014.

The new ad commences another exciting year for LYNX as it continues to reposition itself as a total grooming suite for men, aimed at delivering quality fragrance, shower and hair products to help guys achieve confidence in their own personal style. In the first half of the year, LYNX will release a new creative focussed on its anti-perspirant range, along with an exciting new male grooming range in February. The new range will be accompanied by a collection of new creative assets and a strong digital, social and media campaign.