BBH London & KFC are Putting Friendship to the Test This Christmas 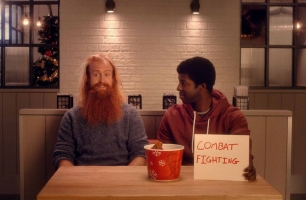 The game challenges friends to answer questions about one another, with chicken as the reward. The closer their friendship, the more full their bucket.

A TV campaign, comprising five executions, launches on 14th November. To cast the films, KFC scoured the country for real best friends to play the game in a KFC restaurant. This also formed the basis of a nationwide poster campaign which showcased the friends taking the test.

KFC is also challenging the public to take part in The Friendship Bucket Test. An online test on KFC.co.uk allows friends to play the game over social media. And the test will also be running in selected stores around the country, allowing people to play the game for real.

Hamish Pinnell, Creative Director at BBH London commented “while the trend for narratives about families is at its highest, we wanted to do something real about friends. We captured some amazing friendships for our TV campaign and we hope that they inspire the public to get involved and share a moment with their friend this Christmas.”