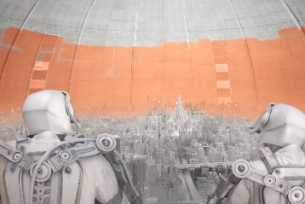 Why is the future always depicted colourless? Leading paint manufacturer Dulux is launching a new integrated campaign posing this question and warning that a colourless future means a future without the emotional power of colour.

The campaign launches on Thursday 12th March with a 60 second film, created by BBH London, which inspires us all to avoid sleepwalking into a colourless future and instead become ‘colour rebels’.

Taking stylistic cues from movies set in an utopian future, which are always depicted as colourless and pristine, the film tells the story of a young man (Calum) living in a future world where colour is outlawed. His life as a ‘dome painter’ - ensuring the city stays white - is monotonous, but most strikingly, it is devoid of emotion and spirit.

An encounter with a striking young lady (Frieda), the leader of the ‘colour rebels’, takes him into an underground world, alive with contraband colour. There, Calum experiences colour for the first time. We watch as he is transformed by the powerful impact colourful surroundings have on emotions and life. Together, Calum and Frieda rally to take action against the colourless world and show their fellow citizens how colour can change their lives for the better.

The film was directed by Daniel Wolfe through Somesuch. It ends with the line ‘Your Life Is A Story, Change It With Dulux’, reiterating Dulux’s point of view that colour doesn’t simply change your physical environment, it also has the power to change how you and those around you live more positively within those spaces. The film is the second chapter of the ‘Change Your Story’ platform, launched in 2014 with Prohibition.

An interactive extension of the film will live on dulux.co.uk/interactive, allowing the viewer to explore an immersive world of colour through Dulux.

The shoppable film – the first for the brand - allows users to click-through to the ecommerce website to purchase product. It also takes users on a journey of the ‘colour hideout’ from the TV advert, and at every stage users will be able to click on objects and walls to explore the ‘colour magic’. Furthermore, the interactive film will include a competition element with the ability to win one of 100 Dulux Dog cuddly toy giveaways.

Furthermore, throughout the course of the year there will be the chance to follow the hero couple on the next stages of their story via the release of a number of product focused films. The campaign will continue with product comms for ‘Travels in Colour’ (a new range of paint colours inspired by beautiful places), The Dulux Let’s Colour Guarantee, Weathershield exterior paint, testers and The Dulux Visualizer app.

The above the line campaign and digital experience were created by BBH London, social and ‘always on’ content by AnalogFolk, PR by Mischief PR, media buying by Mediacom Mischief PR will create debate around the brand’s point of view and the film’s premise with thought-provoking report on Britons’ relationship with colour for editorial media, talking points that earn attention and create debate amongst consumers and experiential activity to encourage people to be Colour Rebels. Meanwhile, AnalogFolk is responsible for social media activity, editorial content and also updates to the Dulux website.

Johnny Corbett, Senior Marketing Manager for Dulux comments: “We believe that Colour can change more than just your walls - it has an emotional and transformative impact on people's lives. That’s a really powerful idea, which we are bringing to life in a powerful way; through advertising, connected online with tools and services, and of course through great quality colour that people can bring to their homes. It is a campaign which delivers on what we believe at Dulux, that the impact of colour goes way beyond just what is in the tin of paint, even though that is fantastic too!”

Martha Riley and Nick Allsop, Creative Directors at BBH London commented: “Living in the modern world can feel like you're being brainwashed with visions of clean, minimal perfection, from the smartphones in our hands to the new-build apartments painted 'estate agent white'. If we give in to this accepted wisdom, we're signing up to an emotionless future. Colour is powerful, an act of individual rebellion against a cold, blank existence. Daniel Wolfe is Britain's most exciting and dangerous young film-maker, and he's the perfect choice to turn these truths into a thought-provoking sci-fi epic with scale and emotional truth.”

Daniel Wolfe, the director of the film, commented: “We need colour. Better explained with childlike simplicity, as in The Great Blueness and Other Predicaments: ‘In a time known as the Great Greyness, a wizard discovers the colour blue in his laboratory. He soon realizes that Blueness is not so perfect either, and that more colours are needed to make the world so beautiful that it will never need to be changed again. Full colour.’ Maximum security prisons are white. Without colour we’re snow-blind.”