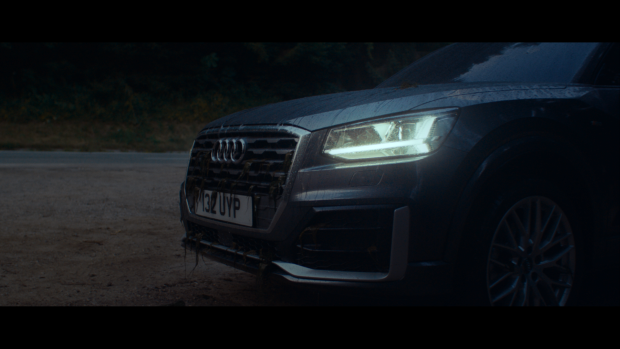 This week sees Audi launch a major new campaign, created by BBH London, which celebrates their impressive SUV range. The engineering and reliability of Audi’s Q Range mean they are trusted with the more predictable everyday jobs. Secretly, however, they dream of overcoming challenges and conquering new terrain. Give them half a chance to have some fun and you can be sure they’ll take it.

The film, shot by award-winning director Marcus Soderlund, opens on a dark, tranquil scene in the woods of Slovenia. The driver of a car transporter sleeps soundly as a few of his trusty SUV models manage to silently escape off the back of the transporter and drive off into the woodlands. The cars proceed to drive effortlessly off-road, gliding gracefully through outdoor elements, breaking with precision, and reversing with the control and skill you’d expect from the Vorsprung durch Technik brand and it’s progressive quattro all-wheel drive technology.

The hero film features the new Audi Q7 (which launches this year) along with the Q2 and Q5. It is supported by multiple cross-channel activation assets, including 30s product films, which highlight the various SUV model capabilities, and a print and digital OOH campaign for the Q7 shot by Benedict Redgrove.

The film’s soundtrack is a cover of the classic song ‘I Could Have Danced All Night’ (published by Warner Chappell Music Publishing and composed by Lerner/Loewe). The recording is Faultline featuring JAKL. As with past re-records, Audi continues to celebrate emerging artists; details of the artist will be published on the Audi website and the track will also be available to download from Spotify.

Ian Heartfield, CCO at BBH London said: "Everybody knows that SUV owners rarely use them for what they were built to do. In this film we bring that insight to life by showing what the cars would do if they got half a chance. A simple story, told with charm, and brought to life with craft and production values, all the classic Audi UK ingredients."

Anna Russell, head of marketing at Audi UK said: "This commercial is a delightful celebration of our growing range of award-winning Q models, as it really embodies the drivers who have the contagious enthusiasm to push boundaries and go the extra mile. These Audi SUVs truly exemplify our Vorsprung credentials through their advanced technologies and striking styling which sets them apart from other SUVs in the market."